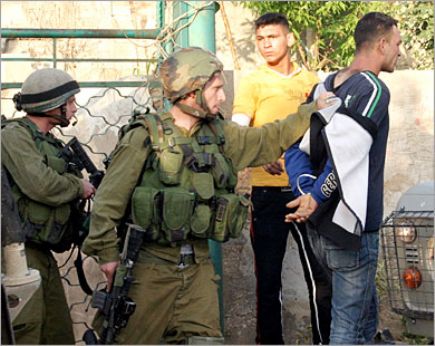 Two of the kidnapped were identified as Mohammad Azmi Mardawy, 30, and Salem Amin Abu Zeid, 48.

Meanwhile, the Israeli Radio reported that Mardawy is a leader of the Islamic Jihad in the Jenin area, and that he is a “suspect in a number of attacks against the army, and other Israeli targets”. He was released from prison four months ago after serving a 7-year term.

On Wednesday evening, soldiers invaded Dir Estia town, north of Salfit, and kidnapped two residents after breaking into, and searching, their homes.

Head of the Dir Estia Village Council, Nathmi Salman, told the Quds Press news agency that several Israeli armored vehicles invaded the town, and that soldiers broke into several homes and searched them.

Salman added that soldiers kidnapped Ahmad Yousef Zeidan and Kifah Abdul-Fattah Zeidan, and took them to an unknown destination.