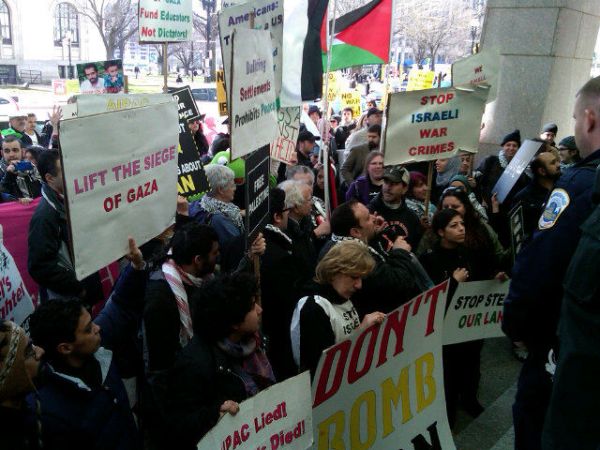 The annual meeting of the American Israel Public Affairs Committee, held this weekend in Washington DC, was attended by US President Barack Obama and Republican Presidential candidate Newt Gingrich, who both pledged unwavering support for the state of Israel. But the conference also faced a large group of protesters who gathered both outside and inside the conference itself to challenge US aid to Israel.On Sunday, a 22-year old Jewish student activist with the youth wing of Jewish Voice for Peace disrupted a session called “The Struggle to Secure Israel on Campus” and unfurled a banner on stage reading, , “Settlements Betray Jewish Values” and a Hebrew text from Deuteronomy meaning “Justice, Justice, You Shall Pursue.”

Liza Behrendt said that her disruption of the session was meant to call attention to the silencing of Palestinians— and young Jews who support them — on U.S. campuses. The panel included officials from AIPAC, Stand With Us, The David Project, and Hillel, who discussed tactics for opposing human rights groups on campus, in particular those that promote the use of Boycott, Divestment or Sanctions (BDS) to pressure Israel to be accountable to international law.

Panelist Wayne Firestone, CEO of Hillel, last year issued controversial guidelines barring Hillel groups from partnering with organizations that support any facet of the BDS movement or that lack a specifically Zionist stance.

According to Behrendt, “I felt it was necessary to confront Wayne Firestone, whose condescending guidelines barred my Brandeis University chapter of Jewish Voice for Peace from joining Hillel last spring. Hillel’s guidelines are part of organized efforts to enforce an ideological status quo among young Jews on Israel, but they are completely out of touch with what’s happening among young people.”

Hundreds of other protesters gathered outside the AIPAC summit and chanted slogans, constructed a mock checkpoint to emulate the hundreds of Israeli military checkpoints that prevent Palestinians from having freedom of movement, and engaged in street theatre to bring attention to the plight of the Palestinian people.

One of the organizers of the protest, Jewish activist Rae Abileah, said, “We don’t have any illusions that we’re going to shift Congress this weekend. We just have the hope that we’ll change public opinion about the threat of a war with Iran.”