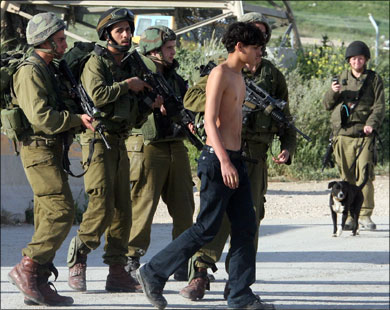 The International Tadamun (Solidarity) Foundation for Human Rights reported that Israeli soldiers have been recently invading Palestinians area, breaking into homes at night and kidnapping Palestinian youths, in order to train new army recruits.The Foundation stated in a press release on Sunday that “Israeli soldiers invaded recently several towns, villages and refugee camps in the occupied West Bank, kidnapped dozens of ordinary civilians, took them to military bases, and release them later on, as part of a new field training program for the soldiers”.

It added that, as part of this training, eight Palestinians were kidnapped a few days ago in Kafr Qaleel village, east of the northern West Bank city of Nablus, and a similar number of residents in Sorra village, west of Nablus, and released them after the training was concluded.

The soldiers caused excessive damage to the homes of the kidnapped residents, as this “training” included conducting home invasions and searches, and conducted these attacked after midnight and early dawn hours.

The Foundation further stated that this practice “turns the Palestinian homes into training fields and a lab to train Israeli military officers and recruits on invasion and search techniques, in addition to providing the soldiers with interrogation skills by practicing on innocent civilians”.