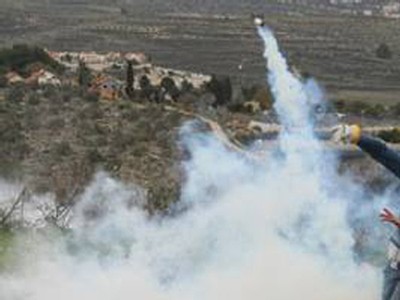 Palestinian medical sources reported, Monday, that a Palestinian youth was seriously wounded after Israeli troops fired gas bombs and rubber-coated metal bullets at Palestinian protestors, at the Atara roadblock, north of the central West Bank city of Ramallah.The sources stated that resident Mohammad Taiseer Abu Awwad, 19, was critically injured on Monday by Israeli troops when they opened fire at a group of Palestinian youths conducting a commemoration protest near the central West Bank city of Ramallah. He was hit in the head and suffered a skull fracture that lead to internal and external bleeding.

Dozens of youth were holding a protest at the roadblock marking the death of the six family members of Bassam Abu Awwad, after their vehicle collided with a Hummer Israeli military jeep at the roadblock, two years ago.

The crash took place on Friday, March 5, 2010, when an Israeli military Hummer Jeep crashed into a Palestinian Cab at the Silwan Bridge, in the Ramallah district; resident Bassam Abu Awwad, 40, his wife Samia, 27, his children Yousef, 8, Aayaat, 3, Jannat, 2, and his two-month infant, Mahmoud, were all killed.