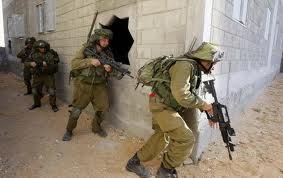 The Wadi Hilwa Information center reported that Israeli soldiers kidnapped, on Monday at dawn, ten Palestinians, including five children, in occupied East Jerusalem, and in Hebron, in the southern part of the West Bank.Jawad Siyam, head of the Wadi Hilwa Information Center, in Silwan town, south of the Al-Aqsa Mosque, reported that dozens of soldiers invaded the town during down hours, broke into several homes, and kidnapped five residents identified as Shaddad Al-A’war, 12, Suhaib Al-A’war, 13, Elias Al-A’war, 14, Islam Al-A’war , 17, and Ahmad Salah, 14.

All of the kidnapped residents in Hebron were moved to the Etzion Israeli military and security base, north of Hebron.

Local sources reported that the army broke into, and violently searched several homes in Al-Arroub and Beit Ummar, terrifying the residents and causing damage to their property.

Furthermore, Siyam said that that several new cracks were found in Wadi Hilwa playground that was bulldozed by the army two weeks ago, an issue that caused fears among the residents of former cracks.

Two days ago, two more cracks occurred at the main road, near Al-Ein refugee camp, in the center of Silwan, while another crack caused the collapse of wall onto two homes in the town.

He said that the cracks are some of them effects and destruction caused by Israel’s ongoing excavations in the area despite the heavy rain.

Troops conduct night and early dawn invasions, and arrests, in the occupied West Bank on a daily basis; such attacks also include home invasions leading causing damages to the homes and property of the residents.