Army Kidnapped 200 Residents In Hebron Since The Beginning Of 2012 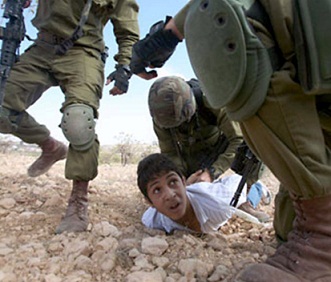 He further stated that the army carried out dozens of invasions, and broke into dozens of homes causing extensive damage to their property, and also repeatedly forced the residents out of their homes under the rain and the cold.

As for arrests targeting children, An-Najjar said that, in Hebron alone, the army kidnapped more than seven children in February, and violently attacked them.

According to statistics of the PPS, the army transferred, in February, more than 30 Palestinians to interrogation centers where they were forced to stand for extended periods, and were subjected to physical and psychological torture. Eight of them were moved to Administrative Detention without charges or trial.

On Monday at night, soldiers kidnapped six Palestinians from the southern West Bank city of Hebron, and three from the nearby town of Beit Ummar.