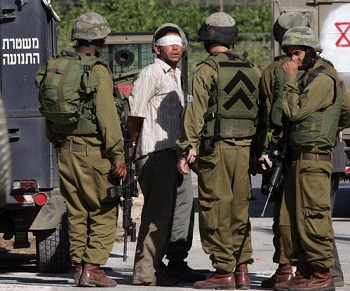 Israeli soldiers kidnapped, on Tuesday, sixteen Palestinians, including four teenagers, in several districts in the occupied West Bank, installed roadblocks, searched dozens of vehicles, and took over a vehicle that belongs to a resident of Jerusalem.The Palestinian News & Info Agency, WAFA, reported that the army invaded the southern West Bank district of Hebron, and kidnapped six residents in the nearby Beit Ummar town, after breaking into and searching their homes; the kidnapped residents were moved to an Israeli interrogation center.

Soldiers also invaded the nearby town of Beit Ummar, and kidnapped three residents identified as Mo’taz Khaled Awad, 19, his brother Aayish, 17, and Bassam Abu Maria, 16, and took them to an unknown destination.

Mohammad Abu Awad, spokesperson of the Popular Committee Against Settlements in Beit Ummar, stated that soldiers, based at the entrance of Beit Ummar, stopped and searched dozens of vehicles, causing a traffic jam, and caused deliberate damage to a number of vehicles before kidnapping a resident of Jerusalem and taking over his vehicle.

The army also kidnapped a child, identified as Basel Khaled Abu Hashem, 15, and took him to an unknown destination.

Soldiers also installed roadblocks in Joret Bahlas area, at the northern entrance of Hebron, and at the Nabi Younis entrance in Halhoul nearby town, in addition to a roadblock at the entrance of Al-Fawwar refugee camp, south of Hebron.

The army then went on to stop dozens of vehicles, and checked the ID cards of the residents while searching the vehicles.

In Bethlehem district, soldiers invaded Al-Obeidiyya town, and handed a resident a military order instructing him to head to the Etzion military base for interrogation.

Local sources reported that soldiers broke the house of Jamal Shanaita, 55, and handed the military order to his son, Mahmoud, 25.

The latest arrests raise the number of Palestinians kidnapped by the Israeli military in the West Bank in less than 48 hours to 29.

On Monday, Amjad An-Najjar, head of the Hebron branch of the Palestinian Prisoner Society (PPS), reported that Israeli soldiers kidnapped more than 200 residents in the Hebron district, in the southern part of the West Bank, in January and February of this year.

Israeli soldiers kidnapped, on Monday at night, 6 Palestinians from the southern West Bank city of Hebron, and three from the nearby town of Beit Ummar, local sources reported.

The army also fired gas bombs, rounds of live ammunition, and rubber-coated metal bullets at local youths who hurled stones and empty bottles at them; no injuries were reported.

Furthermore, the army closed the northern entrance of the town and prevented the residents from entering or leaving it.