Settlers Try To Install Outpost In Place Of Evacuated Settlement 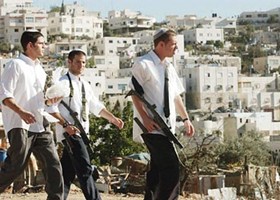 A group of armed extremist settlers, attacked on Tuesday afternoon, the location of the former Homesh settlement, in the northern part of the West Bank, and installed an outpost before stopping and searching several Palestinian vehicles.Local sources reported that the settlers blocked the Jenin-Nablus road, and searched dozens of Palestinian vehicles.

The settlers also chanted racist slogans against the Palestinians and the Arabs, and attacked a number of residents. They also “vowed” to rebuild the evacuated illegal settlement.

The sources added that Israeli soldiers were present in the area but did not intervene.

Homesh was evacuated and dismantled in 2005 as part of the “Disengagement Plan” when Israel evacuated all settlers out of the Gaza Strip, and from four smaller settlements in the West Bank.

In March 2007, Israeli soldiers evacuated some 300 fundamentalist right-wing settlers who camped out at the location of the former Homesh settlement. Two teenage settler girls were apprehended by the police on suspicion of attacking policemen during the evacuation.