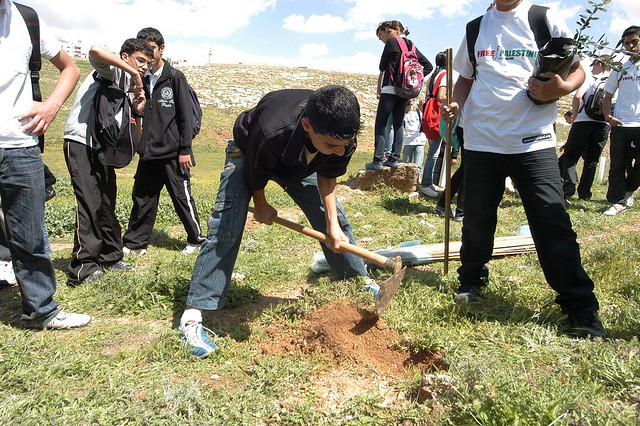 Palestinian farmers, from the southern West Bank villages of Al Khadier and Beit Iskaria, announced that a group of settlers stormed on Thursday morning their lands uprooted 100 young olive trees and took it all away.100 olive trees were part of some 200 trees that were planted on Wednesday by Norwegian students and their teacher from Oslo on Palestinian farmers lands near the illegal Israeli settlement of Aliazar.

On Wednesday morning a group of 11 Norwegian students and their teacher joined Yassin Da’doua on his land to plant 200 olive trees as part of the olive tree planting campaign organized by Joint Advocacy Initiative of East Jerusalem YMCA and YWCA of Palestine.

The group along with the Palestinian farmer and his family managed to plant half of the trees on Wednesday before the leader of the radical settler organization ‘Women in Green’, Nadia Matar, arrived along with two other Israeli settlers who started taking photos of the young Norwegians.

After some time Israeli soldiers, military police, and uniform police arrived at the scene and demanded the Palestinians and their friends stop planting the trees and leave the area. The military commander said that the land is owned by the state of Israel; a claim that proven wrong by the Palestinian farmer who has ownership papers from both the Ottoman period and from the Israeli court that state he is the private owner of the land.

“How can they call me a Nazi? My grandparents fought the Nazis during the second world war,” said one of the Norwegian students responding to Matar comments.’

While planting trees continued; troops arrested Sajied Da’doua, 18, who was helping his uncle to plant olive trees on his land. Sources told IMEMC that Sajied could be released with bail today.

Israeli soldiers agreed to allow the Palestinian family to stay but force the Norwegians and their organizers to leave. The group was then escorted by Israeli police back to the nearby entrance of Bethlehem city.

While the group of students was being lead away from the land by the Israeli police the remaining un-planted olive trees and the tools got confiscated by the army. Today Matar and her group came back and uprooted the planted trees and took them away.

According to the radical Israeli group webpage Women in Green is a registered non-profit organization founded in 1993, and is not affiliated with any political party. Women in Green say they oppose the two-state solution; and end of Israel’s occupation of 967, as well as aggressively supports Israeli settlement of those territories, which Women in Green proposes should be annexed to Israel.