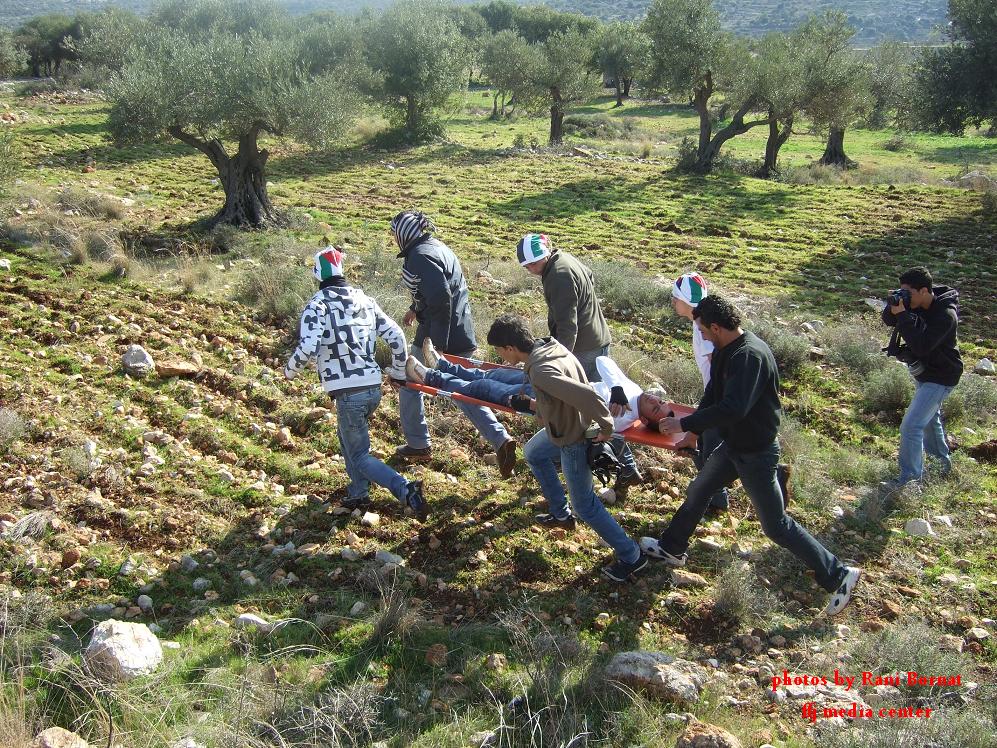 Weekly non-violent protests were held on Friday afternoon in the villages of Bil’in, Nil’in, Al Mas’ara and Nabi Saleh. Two citizens were injured in addition to dozens of cases of inhalation of military grade tear gas in the village of Bil’in, west of Ramallah.In Bil’in, two Palestinians were wounded: Abdullah Mohammed Yasin, 19 years old, was shot by a rubber bullet in his back, and Aed al Khateeb, 18 years old, was hit by a rubber bullet in his leg. These injuries were in addition to dozens of cases of asphyxiation from poison gas in the weekly march organized by the Popular Committee Against the Wall in Bil’in.

This week’s march in Bil’in, as well as in Nil’in, Al Mas’ara and Nabi Saleh, focused on supporting and showing solidarity for the thousands of Palestinian prisoners being held in Israeli military detention camps. In particular, the protesters voiced support for prisoner Hana Shalabi, who is in the third week of an open-ended hunger strike.

In Bil;in, Israeli and international peace activists joined locals for a march which began after Friday prayers. The demonstrators marched from the centre of the village heading to the land which was returned to the village after a lengthy lawsuit against the Israeli government.

Upon the arrival to the Abu Lemon area , protesters were able to remove some of the barbed wire, made holes, and broke through the fence. Then the soldiers who were situated behind the concrete wall shot rubber bullets , stun grenades and canister tear gas toward the participants. This caused the injury of two citizens and caused the asphyxiation of dozens of participants. Some young demonstrators threw stones at the soldiers.

For its part, the Popular Committee Against the Wall in Bil’in denounced the arbitrary decision by the Court towards the photographer captive Hamza Bornat, that sentenced him to18 months in prison and a 5000 NIS fine. This sentence comes after four months of his arrest, knowing that this arrest is the second one after he was arrested two years ago and sentenced to 9 months in prison because he took part in a peaceful demonstration in Bil’in.

In addition, in the central West Bank, troops attacked the weekly anti wall protests organized in the villages of Nil’in and Nabi Saleh.

Meanwhile, in the southern West Bank on Friday, villagers of Al Mas’ara, along with their international and Israeli supporters protested the Israeli wall.

Troops stopped protesters at the village entrance before they reached lands owned by local farmers that Israeli authorities had taken over for construction of the Annexation Wall. Later, troops forced people back into the village using rifle-butts. No injuries were reported.