Six Palestinians Killed In The Gaza Strip As Escalation Continues 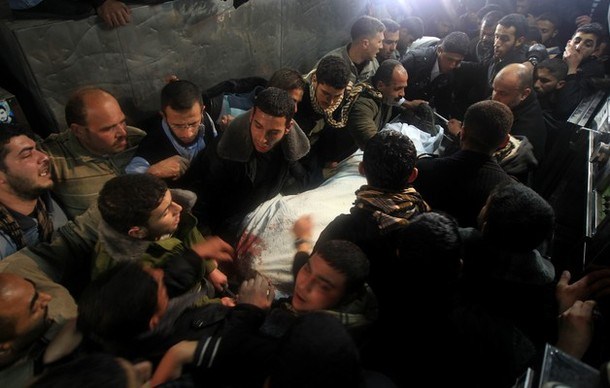 Palestinian Medical sources reported that that a total of six Palestinians were killed on Friday, and several others were wounded, after the latest Israeli bombardment left one dead and two more injured in central Gaza. Earlier five Palestinians were killed and several others were wounded in a number of Israeli attacks targeted the Gaza Strip.Israeli Ynet News reported that Palestinian armed groups fired several shells targeting Ashdod, Eshkol and Beersheba (Be’er Al Sabe’)leading to eight injuries, one seriously.

One of the wounded Israelis is in a serious condition, and another person suffered moderate injuries, the Ynet News added.

The recent escalation started after Israel carried out an extrajudicial assignation, on Friday afternoon, killing the Secretary-General of the Popular Resistance Committees, Zuheir Al-Qaisi, in addition to Mahmoud Ahmad Hanani, 46, one the PRC field leaders from Beit Forik near the northern West Bank city of Nablus who was deported to the Gaza Strip six years ago.

Al-Qaisi was killed after the Israeli Air Force fired at least one missile at a car in Tal Al-Hawa, in Gaza City.

Medical sources in Gaza reported that the bodies of the slain residents were severely mutilated while one of them was decapitated due to the blast of an Israeli missile.

Also, the Islamic Jihad reported that two of its fighters, identified as Mohammad Harara, 22, and Obeid Fadel Al-Gharabily, 23, were assassinated in an Israeli aerial strike east of Gaza city.

A third fighter, identified as Hazem Awad Qreiqe’, was seriously injured and died of his wounds at a hospital in Gaza later on.

Furthermore, at least four residents were injured in Az-Zeitoun neighborhood, east of Gaza City, after an Israeli missile hit their vehicle.

The Al-Quds Brigades of the Islamic Jihad, and several armed resistance groups in the Gaza Strip vowed retaliation, and stated that resistance will continue until liberation and independence.

The Palestinian Authority in Ramallah condemned the Israeli military escalation, and held Israel responsible for the consequences of the latest attacks.

The attacks started on Friday afternoon as Israeli jet-fighters targeted a Palestinian car east of Gaza City. Mohamed Hanani and Zuheir Al-Qaisi were killed in the strike. Al Qaisi is the Secretary General of the Popular Resistance Committees based in Gaza, where Hanani is from the West Bank village of Beit Furik who was deported to the Gaza Strip.

Later on Friday evening, Obeid Fadel Al-Ghribawi and Mohamed Harrara were killed during Israeli bombing targeting the eastern part of the Gaza Strip. Both are fighters with the Islamic Jihad group in Gaza.

In response, Palestinian groups fired home-made rockets at Israeli towns near the Gaza borders. Israeli sources reported no injuries but the army advised residents to go to shelters.

Abu Mojahid, from the Popular Resistance Committees in Gaza, said that his group will avenge the killing of Al Qaissi and his comrades. Abu Mojadi declared the truce over.

Palestinian groups in Gaza agreed on a “calm period” after the 18 days long military attack on Gaza in 2009.