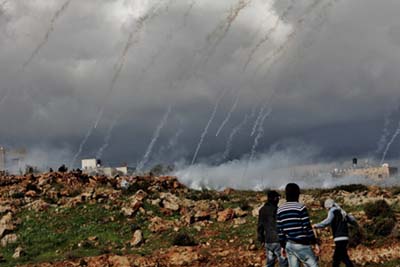 In its Weekly Report on Israeli Human Rights Violations in the Occupied Palestinian Territories for the week of 01 – 07 March 2012, two Palestinian children were killed by the explosion of a mortar shell left by the Israeli army in Hebron. 3 Palestinian civilians, including a child, were wounded in the explosion.Israeli forces have continued to use force against peaceful protests in the West Bank. A Palestinian civilian was seriously wounded in Ramallah. Dozens of protesters suffered from tear gas inhalation.

During the reporting period, two Palestinian children were killed and 3 civilians, including a child, were wounded by the explosion of a suspicious object in Hebron. Additionally, a Palestinian civilian was seriously wounded by Israeli forces north of Ramallah.

On Tuesday afternoon, 06 March 2012, two Palestinian children were killed and three others were wounded when a suspicious object left by the Israeli military exploded in Wad Al-Reem area to the east of Sa’ir village, northeast of Hebron. According to medical reports and observations by a PCHR fieldworker, the two children who were killed sustained serious injuries and burns throughout the body. Their bodies were dismembered as the shrapnel penetrated their heads, chests and faces. Immediately following the incident, the Palestinian police opened an investigation into the incident. The police announced that the explosion was caused by a mortar shell which had been left by the Israeli military. At approximately 15:20 on the same day, Israeli occupation forces moved into the area to check the explosion and search neighboring farms.

At approximately 07:15, Israeli soldiers positioned at the border between the Gaza Strip and Israel to the east of al-Boreij refugee camp in the central Gaza Strip opened fire at Palestinian areas located near the border. No casualties were reported.

At approximately 11:45 on Tuesday, 06 March 2012, Israeli soldiers stationed on observation towers near Beit Hanoun (Erez) crossing in the northern Gaza Strip opened fire at a number of Palestinian civilians and international solidarity activists who demonstrated near the crossing. According to Saber al-Za’anin, Coordinator of the Local Initiative in Beit Hanoun, who supervises the organization of peaceful demonstrations against the establishment of a buffer zone along the border between the Gaza Strip, at approximately 11:20, a peaceful demonstration that included 40 demonstrators, including 6 international solidarity activists and two journalists, was organized near the Agricultural School in Beit Hanoun. When the demonstrators got as close as to 150 meters from the border, Israeli soldiers opened fire at the demonstrators. The gunfire continued for about 30 minutes. No casualties were reported.

Israeli forces have continued to impose a total ban on the exportation of Gaza’s products, especially industrial products, leading to undermining any real chances to rerun economic establishments. The situation has been aggravated especially after making Karm Abu Salem crossing as Gaza sole commercial crossing and the repeated closure of this crossing which negatively affected the quantity of Gazan products which were allowed to be exported during last April.

On 03 March 2012, a number of Israeli settlers from “Hfat Gilad” settlement uprooted at least 35 olive trees from the lands of Far’ata village, northeast of Qalqilya. The trees belong to Ibrahim As’ad Tawil and Ameen Mahmoud Tawil. Shaher Tawil stated to a PCHR field worker that a number of members of his family received threats from Israeli settlers to attack their lands, claiming that a child from the family broke into the above settlement and set fire to a house in it. In his statement to PCHR, Shaher Tawil said: “On Saturday morning, 03 March 2012, my cousins, Ibrahim As’ad Tawil and Ameen Mahmoud Tawil went to their land. They found that 35 olive trees had been cut. This attack followed clashes with Israeli settlers. At approximately 11:00 on Tuesday, 28 February 2012, I received a phone call from my son who was working on an agricultural plot near the settlement. He told me that Israeli settlers got out of ‘Gilad’ settlement and moved to a house belonging to our relative, ‘Awad ‘Abdul Khaliq Tawil. I immediately went to the area. There were at least 70 Israeli settlers and at least 20 Israeli military vehicles in the area. People began to gather. An Israeli officer wanted someone to talk to. I asked him: ‘What do you want?’ He said to me that the settlers saw a 16-year-old child moving into the settlement and setting fire to a house. We told them it is impossible as no one dares to enter the settlement. The settlers were armed and they wanted to attack us. They threw stones at our relative’s house. The child accused of entering the settlement came and the settlers attacked him. Israeli soldiers then abducted the child, me and two of our relative: Tawfiq ‘Abdul Khaliq Tawil, 22; and Fadi ‘Abdul Khaliq Tawil, 24. They took us to ‘Qidoumim’ settlement and interrogated us. They released the child and me on the same day, but kept our two relatives in custody. On Saturday, 03 March 2012, when Palestinian farmers went to their lands, they found 4 Israeli settlers and a military jeep in the vicinity.”

On 04 March 2012, 3 Israeli settlers threw stones at a Palestinian taxi that was traveling on Tulkarm-Ramallah road near “Titzhar” settlement, south of Nablus. The taxi was damaged, but no injuries were reported.

During the reporting period, Israeli forces used excessive force to disperse peaceful demonstrations organized in protest to Israeli settlement activities and the construction of the annexation wall in the West Bank. As a result, a Palestinian civilian was seriously wounded by a tear gas canister to the head near ‘Attara checkpoint, north of Ramallah. Dozens of Palestinian civilians and international human rights defenders suffered from tear gas inhalation.

Following the Friday Prayer on 02 March 2012, in spite of the cold weather, dozens of Palestinian civilians and international and Israeli human rights defenders organized a peaceful demonstration in Bil’ein village, west of Ramallah, in protest to the construction of the annexation wall and in solidarity with Palestinian prisoners in Israeli jails, especially Hanaa’ Shalabi who has been on hunger strike, and Watan Television and al-Quds Educational Television who were stormed by Israeli forces. They raised the Palestinian flag and called for ending political division. They then moved towards areas of annexation wall. They called through megaphones on Israeli settlers in “Mitityahu” settlement to leave Palestinian land. Israeli soldiers stationed in the area fired rubber-coated metal bullets, sound bombs and tear gas canisters at the demonstrators. As a result, a number of demonstrators suffered from tear gas inhalation.

Also following the Friday prayer on 02 March 2012, dozens of Palestinian civilians and Israeli and international human rights defenders gathered in the center of al-Nabi Saleh village, northwest of Ramallah, to start the weekly peaceful protest against the construction of the annexation wall and settlement activities. The protesters walked towards the gate erected by Israeli forces near the entrance of the village and leading to Palestinian lands that Israeli settlers from the nearby ‘Halmish’ settlement are trying to seize. Israeli soldiers who had been extensively deployed in the area and near all the entrances of the village since the morning, began to confront the protesters who wanted to walk towards the affected lands. Israeli soldiers fired live and rubber-coated bullets, sound bombs and tear gas canisters at the protesters. As a result, a number of civilians suffered from tear gas inhalation.

At approximately 08:00 on Monday, 05 March 2012, dozens of students from Prince Hassan School and dozens of Palestinians gathered near ‘Attara checkpoint up north of Bir Zeit village, north of Ramallah. They were commemorating the second anniversary of the deaths of 6 Palestinians from the family of Bassam Abu ‘Awwad when an Israeli military jeep collided with a Palestinian taxi between the Palestinian village of Silwad and ‘Ofra’ settlement, northeast of Ramallah. The demonstrators walked towards ‘Attara checkpoint, where Israeli soldiers were stationed behind concrete blocks. Israeli soldiers closed the checkpoint and clashes erupted between them and the demonstrators. Some youth threw stones at the soldiers who responded by firing sound bombs and tear gas canisters at the demonstrators. As a result, Mohammed Tayseer Yousef Abu Awwad, 19, was directly hit by a tear gas canister to the head and he lost consciousness. His cousin who was also participating in the demonstration carried him and walked 50 meters to the back of the protest. Abu Awwad was transported by a taxi to Bir Zeit village. There, he was taken into a Palestinian ambulance to Palestine Medical Compound in Ramallah where he immediately underwent a surgery. Dr. Ahmed al-Bitawi, Director of this Compound, stated that Abu Awwad sustained fractures to the skull and hemorrhaging in the head as a result of the wounds he sustained by the tear gas canister. His condition was described as critical. Eyewitnesses told a fieldworker of PCHR that the tear gas canister was fired at Abu Awwad by a soldier who was only 20 meters from him and that Abu Awwad was not posing any threat to Israeli forces.