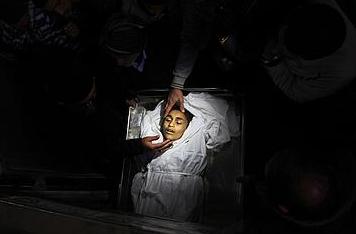 A Palestinian child was killed, on Monday morning, and six others were injured, while they were heading to school in the northern part of the Gaza Strip. 21 Palestinians have been killed, and more than 100 have been wounded by army Israeli fire since Friday evening.Local sources reported that an Israeli war-jet fired a missile at school students near a gas station in As-Sudaniyya area, west of Gaza city, killing one student and wounding six others.

Adham Abu Salmiyya, spokesperson of the Higher Committee of Medical and Emergency Services, identified the slain child as Nayef Sha’baan Qarmout, 15, and added three of the wounded children are in serious conditions.

Earlier on Monday morning, the Israeli army assassinated two fighters of the Al-Quds Brigades, the armed wing of the Islamic Jihad, after conducting a series of air-strike targeting the southern part of the Gaza Strip, Gaza city, and northern Gaza. More than 46 residents, mainly women and children, have been injured.

The Israeli offensive against the Gaza Strip started, on Friday, after the army assassinated the secretary-general of the Popular Resistance Committee, Zuheir Al-Qaisi, 49, from Rafah, and Mohammad Hanani, 44, from the northern West Bank city of Nablus; Hanani is the son-in-law of Al-Qaisi.

Later in the evening of the same day, the Israeli Air Force fired a missile at fighters of the Al-Quds Brigades, the armed wing of the Islamic Jihad, killing three; they were identified as Mohammad Harara, 24, Fadel Al-Gharabli, 25, and Hazem Qreiqe’, 33.