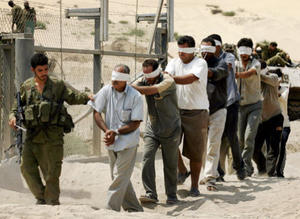 Israeli soldiers broke, on Monday at dawn, into Asqalan prison, and attacked dozens of Palestinian political prisoners, wounding eleven, one seriously. The soldiers tried to force several detainees to submit to naked body search.Palestinian Minister of Detainees, Issa Qaraqe’, told the Palestine News & Info Agency, WAFA, that the soldiers broke into the detainee’s room carrying batons and gas bombs, and tried to force the detainees to submit to naked body searches.

The detainees refused to submit to the search, and the soldiers used military dogs before attacking them with batons, an issued that led to clashes.

In a letter that was leaked from Asqalan prison, the detainees stated that the attack was carried out at 5 at dawn, and that the dozens of soldiers broke into their rooms and violently attacked them before trying to force some of them to fully undress.

They further stated that eleven detainees were wounded, one seriously, and that the situation remains fragile as the army appears to be preparing for another assault.