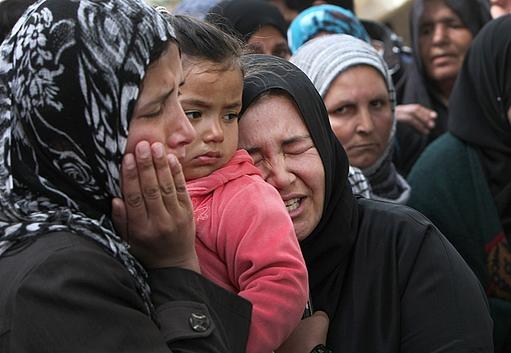 Earlier on Monday, a 15-year-old school student, identified as Nayef Sha’baan Qarmout, 15, was killed, and six other children were wounded, three seriously, when an Israeli war-jet fired a missile at school students playing near a gas station in As-Sudaniyya area, west of Gaza city.

The child was playing with some of his schoolmates at a playground near his school, north of Gaza city, when the army fired a missile at the playground.
The latest Israeli bombardment raises the number of Palestinian killed since Friday afternoon to 23 while dozens of residents, including children, were injured; several wounded residents are in currently in serious conditions.

Earlier on Monday, two fighters of the Al-Quds Brigades, the armed wing of the Islamic Jihad, were killed when the army carried out a series of air strikes targeting the southern part of the Gaza Strip, Gaza City, and the northern part of the coastal region.

The army killed a fighter, identified as Ra’fat Jouda, 24, member of the Al-Quds Brigades, and wounded two other fighters, in Al-Qarara area; a woman who was walking nearby was also wounded.

On Monday at dawn, a fighter identified as Hamada Salman Abu Motlaq, 24, was killed when the army fired a missile at him near the mosque of Abasan village, east of Khan Younis, in the southern part of the Gaza Strip.

The fighter is a member of the Al-Quds Brigades; three civilians were wounded and were moved to a local hospital.

Late on Sunday at night, and after midnight, 35 Palestinian, most of them are women and children, were injured in a number of Israeli attacks targeting several areas in Gaza. They were all moved to local hospitals suffering mild-to-moderate injuries, while one of them is in a serious condition.

The Al-Quds Brigades issued a press release stating that it will continue to fire shells into Israeli areas in retaliation to the ongoing Israeli military escalation.
Meanwhile, Israeli Army Chief of Staff, Benni Gantz, issued orders to the army to keep on “targeting fighters” in Gaza. His statements came after a meeting he held with senior military commanders.

On his part, Israeli Defense Minister, Ehud Barak, stated that Israel will continue its strikes, and added that “the army will strongly retaliate to any attempt to harm Israeli citizens”.

Israeli Army spokesperson, Brigadier Yuav Mordachai, stated that the army is ready for a massive ground offensive in the Gaza Strip should the resistance continue to fire shells into Israeli territory.