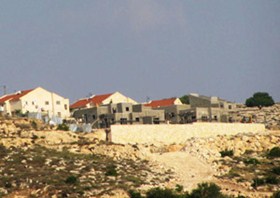 A group of extremist Israeli settlers expanded, Tuesday, the illegal Negahot settlement outpost on the expense of privately owned Palestinian lands in Doura city, near the southern West Bank city of Hebron.Local sources reported that, a few days ago, the settles brought several trucks loaded with cement and construction materials.

The settlers then started the construction of several units in the western side of the illegal settlement while the army was heavily deployed in the area.

Some settlers even illegally took-over privately-owned Palestinian lands in the area, fenced them, and hooked the area with running water
.
It is worth mentioning that there are around 10 settler families living in the illegal outpost, protecting by dozens of Israeli soldiers.

The army also installed roadblocks around the outpost and prevented Palestinian traffic with driving nearby.