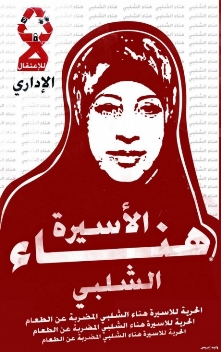 Palestinian Minister of Detainees, Issa Qaraqe’, stated on Monday evening that hunger-striking detainee Hana’ Ash-Shalabi, who has been on hunger strike since 34 days, was moved to Meir Israeli Hospital, in Kfar Saba, after a sharp deterioration in her health condition. Qaraqe’ said that Ash-Shalabi was hospitalized after she was examined by a medical team of the Physicians for Human Rights (PHR), adding that the doctors had to wait for three hours until they were allowed to see her.

He further stated that the physicians determined that Ash-Shalabi is unable to stand, nauseated, suffering from pain in her abdomen, headache, her heartbeats are slower than they should be, and low sugar levels.

Qaraqe’ said that Ash-Shalabi refuses to take any medications or liquids except in the presence of PHR doctors who will be visiting her again Tuesday morning.

The Minister held Israel fully responsible for the life of Ash-Shalabi, and voiced an appeal to human rights groups to intervene and save her life.

Ash-Shalabi is demanding the Israeli Authorities to release her as she is being held without charges or trial.