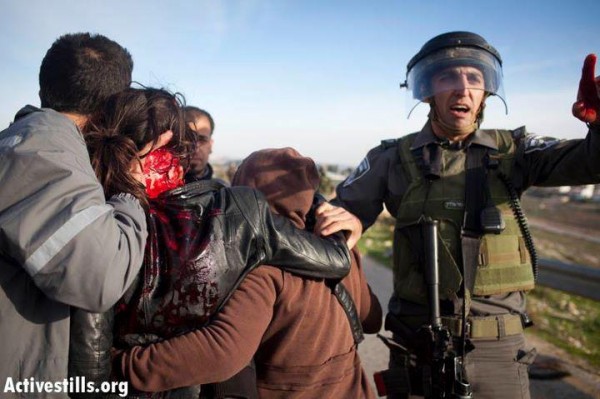 Israeli soldiers invaded on Wednesday at dawn Nabi Saleh village, near the central West Bank city of Ramallah, broke into and searched several homes causing damage to personal property, before the the army confiscated private property, including computers, documents and phones.The media office of the Nonviolent Resistance Committee I Nabi Saleh reported that the army also broke into its building and confiscated a computer, in addition to confiscating three computers from the home of Basem At-Tamimi, who is currently in an Israeli prison for his nonviolent activities against the Wall and settlements.

Army also invaded the home of Naji At-Tamimi, the coordinator of the Popular Committee in the village, and confiscated his computer after searching his home.

At-Tamimi stated that the army also confiscated a mobile phone, USB internet adaptors, personal documents, certificates, books, and a magazine published by the nonviolent resistance committee in the village. The soldiers also confiscated magazines printed by the Israeli Information Center for Human Rights in the Occupied Territories, (B’Tselem).

The attack against the village started after the army blocked all roads leading to it, and dozens of soldiers were deployed in its streets before breaking into and searching several homes.

The soldiers also pushed and harassed several children and women after breaking into their homes, terrifying them and their family members.

Following the invasion, the Popular Resistance Committee called for an urgent meeting to discuss the latest assaults, and the repeated invasions against the village, and issued a press release stating that these ongoing attacks and violations are clear proofs that Israel, with all of its military power, feels unable to suppress the nonviolent resistance, and feels unable to scare the residents, including the children.

The Committee said that this attack targets it and its Media Office, including Tamimi Press Office, as they managed to document the ongoing Israeli violations, and the excessive use of force by the soldiers against the nonviolent activists, and the civilians.

The army has been invading the village every night over the last three weeks, and kidnapped three residents including one child; the soldiers always seal all village entrances before violently breaking into homes during late night and early dawn hours. Soldiers harass and attack dozens of residents during these invasions.