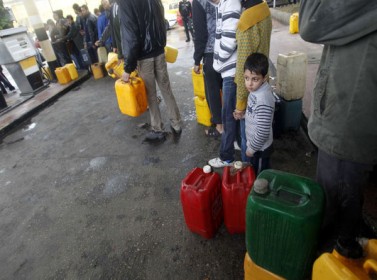 The Hamas led Palestinian government in the Gaza Strip is now trying hard to control the deteriorating situation in the Gaza Strip, following the serious shortages of electricity and fuel supplies which have put a hold on nearly 85% of public services, according to reports from the Arabs48 news website.The government in Gaza is considering declaring a state of emergency while its officials, in addition to other Hamas officials, are accusing the Palestinian Authority of Mahmoud Abbas in the West Bank, and the Egyptian government of being responsible for this crisis.

Several Palestinian media outlets have reported that there are differences in opinions, and arguments, between leaders of the Hamas movement, and leaders of Hamas’ government in Gaza, who also traded accusations of responsibility for this issue.

Meanwhile, Palestinian Power and National Resources Minister in the central West Bank city of Ramallah, Omar Kittana, stated that Egypt agreed to supply Gaza with five additional megawatts in the near future.

He added that with the additional megawatts, the total amount of electricity imported from Egypt would reach 72 megawatts.

Kittana stated that this increase will lead to a partial improvement in the electricity situation in the southern part of the Gaza Strip, but added that there is a greater need in Gaza, and rejected accusations by Hamas leaders in Gaza holding the Palestinian Authority in the West Bank responsible for this crisis.

Thousands of Palestinians have to stand in line for several hours in order to be able to fill a gallon of fuel for home generators, and the vast majority of them went back home empty-handed. Bakeries in Gaza had to decrease the number of operation hours to half due to fuel and electricity crisis.

Abdul-Nasser al-Ajrami, head of the Bakeries Society in Gaza said that the reduction of hours will start Thursday until further notice.

Al-Ajrami demanded that the Hamas led government in Gaza ensure the acquisition of fuel needed in the coming 48 hours in order to keep the power generators running, and warned that all bakeries will have to shut down. There are nearly 60 bakeries in the Gaza Strip.

Furthermore, the Higher Committee for Medical and Emergency Services in Gaza reported that nearly 50% of ambulances, and fire-trucks, are currently parked and cannot operate.

Committee stockperson, Adham Abu Salmiyya, warned during a press conference held at the Ash-Shifa Hospital in Gaza, that all ambulances and rescue vehicles in the Gaza Strip will be totally incapacitated.

He added that should Israel attack Gaza, or should any emergency take place, the situation will be disastrous as medics and rescue teams will not be able to perform their duties.

Abu Salmiyya held Israel responsible for the current situation, and the sharply deteriorating humanitarian crisis resulting from the illegal Israeli siege that was imposed on the coastal region since more than five years. He voiced an appeal the Arab, Islamic worlds, and the International Community to intervene.

The official further demanded International Human Rights groups to perform their human responsibilities immediately in order to alleviate the suffering of the residents.