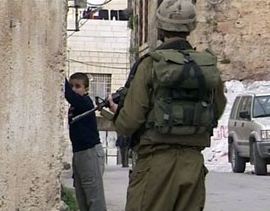 A report by the Israeli newspaper, Haaretz, revealed that on Monday Israeli soldiers kidnapped an 11 year old Palestinian child while he sat behind his desk at an elementary school in Ras al-Amoud neighborhood, in occupied East Jerusalem. The army claimed that the child had “thrown stones at Israeli military jeeps in the area”.

Haaretz said that the soldiers invaded the school, broke into the classroom and kidnapped the boy. Soldiers also detained the vice principal of the school.

Haaretz said that the child ‘confessed’ after being beaten by the soldiers, and also told the interrogators that the vice principal of the school helped him hide.

The paper added that the vice principal, Salah Moheisin, was taken prisoner in front of a classroom filled with students, and was placed in a military jeep parked outside the school before he was taken to a police station for interrogation.

According to Haaretz, a student, who was kidnapped by the army a few days before the incident in question took place, told the interrogators that Moheisin helped him and other stone-throwing students hide in his office.

The Israeli police released Moheisin later the same day, and no charges were brought against him — mainly due to the fact that the students who made the confession were under duress during interrogation.

The vice principal told Haaretz that he did not know what the police wanted from him, and that he initially though that “the soldiers invaded the school with the aim of terrifying the students in order to deter them from making trouble”.

He added this is the fourth attack of its kind this year, adding that the soldiers often break into the school, search the classrooms, and even search the bathrooms.

The vice principal further stated that he and other staff members repeatedly tried to prevent the soldiers from breaking into the school, but the soldiers keep returning to invade the educational facility.

The vice principal asked the soldiers, during the latest school invasion, if they knew the description of the child they were looking for but they said that they had no idea about that, and that the only thing they knew was that he was wearing a white shirt. The soldiers rounded up all the students searching for the child.

Haaretz said that it managed to document several similar incidents when soldiers harassed Palestinian children heading to school or returning home, and that a father told its reporter that his son came back from school terrified, and when he asked him about the reason for his anxiety, the child said that he, and some of his friends, were taken by the army, placed in military or police vehicles, before they were released later on.