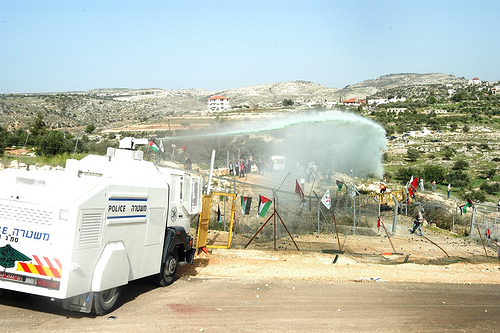 On Friday two civilians were injured, one seriously, while many were treated for the effects of tear gas inhalation when Israeli soldiers suppressed anti wall protests in a number of West Bank villages. At the village of an-Nabi Saleh, central West Bank, two teenagers were injured, one critically, when soldiers attacked the weekly anti wall protest on Friday. This week’s protest was organized under the title of “continued resistance” in response to the Israeli military campaign targeting the villagers to stop the weekly activities.

Medical sources reported that Ez ed-Deen Tamimi, 15 years old, was treated by medics before he was moved to the Ramallah Medical Center suffering moderate injuries. A second child, identified as Osama Bilal Tamimi, 16, was shot by a rubber-coated metal bullet in his foot; his injury was described as mild.

During the week Israeli troops invaded the village on a number of occasions. Soldiers stormed the media office of the Nonviolent Resistance Committee in Nabi Saleh and confiscated a computer, in addition to confiscating three computers from the home of Basem at-Tamimi, who is currently in an Israeli prison for his nonviolent activities against the Wall and settlements. Troops threatened further invasions and attacks if popular nonviolent resistance continued.

“We called our protest today continued resistance, as a response to the Israeli occupation campaign, to tell them that attacks and oppression does not scare us and that we will continue our popular resistance.” Attallah at-Tamimi from the Nonviolent Resistance Committee in Nabi Saleh told IMEMC.

The protestors were also marking the first anniversary of the kidnapping of Basem Tamimi, a local figure and leader of the nonviolent resistance movement in the village who was kidnapped by the soldiers, and remains imprisoned by Israel through a process of endless “legal proceedings” that are only meant to keep him behind bars without charges.

Also in central West Bank, many were treated for the effects of tear gas inhalation when Israeli troops attacked the weekly anti wall protests at the village of Bil’in and Nil’in.

In southern West Bank also on Friday, villagers of al-Ma’ssara, along with their international and Israeli supporters protested the Israeli wall. Troops stopped protesters at the village entrance before they reached lands owned by local farmers which Israel confiscated to build the wall on. Later troops forced people back into the village using rifle-butts. No injuries were reported.