Army Detains A Child At Roadblock Near Jenin 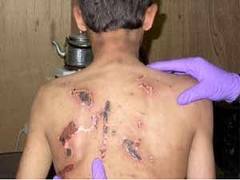 Israeli soldiers detained, on Thursday evening, a 12-year-old Palestinian child at a roadblock close to an illegal Israeli settlement, south of the northern West Bank city of Jenin.The Palestinian News & Info Agency, WAFA, reported that the child was identified as Mohammad Mo’ayyad Metani, 12, from Ya’bod village, near Jenin.

WAFA added that the child was held and interrogated by the soldiers for more than two hours before he was handed to the Palestinian District Coordination Office.

On Monday, Israeli paper Haaretz reported that soldiers kidnapped an 11 year old Palestinian child while he sat behind his desk at an elementary school in Ras Al-Amoud neighborhood, in occupied East Jerusalem.

The army claimed that the child had “thrown stones at Israeli military jeeps in the area”.

Haaretz added that the soldiers invaded the school, broke into the classroom and kidnapped the boy. Soldiers also detained the vice principal of the school.

The child ‘confessed’ after being beaten by the soldiers, and also told the interrogators that the vice principal of the school helped him hide.

One of the kidnapped children, identified as Adi Qfeisha, 13, was taken prisoner in front of his school in the southern West Bank city of Hebron.

There are hundreds of cases where Palestinian children were kidnapped by the army and were subject to harsh interrogation methods, including torture.