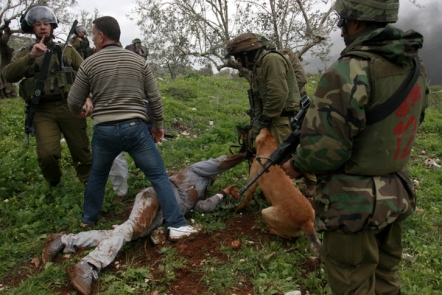 The Palestinian Center for Human Rights (PCHR), based in Gaza, published its weekly report on Israeli violations against the Palestinians in the occupied territory for the period between March 15-21, 2012, revealing that Israeli soldiers carried out 56 invasions into West Bank communities and a limited invasion into Gaza; injuries and damages were reported. (Link to Comprehensive Report in English included at the end of this report)During these invasions, Israeli soldiers kidnapped eight Palestinians in the occupied territories, including three children and one woman.

Five Palestinians, including one child, were kidnapped by Israeli soldiers stationed at various roadblocks in the West Bank.

The Gaza Strip remains under deadly siege, and remains to be isolated from the rest of the world despite Israeli claims of easing the siege.

The PCHR further stated that one child was shot and injured while sitting at his home when the army opened fire at a civilian area in Rafah, in the southern part of the Gaza Strip.

The child, 6 years old, was shot by a bullet to his right thigh as he was sitting at home; the bullet was fired by soldiers stationed at the border between Gaza and Israel, to the east of Rafah.

Soldiers also opened fired at agricultural areas in Khuza’a village, east of Khan Younis, in the southern part of the Gaza Strip.

The army carried out a limited invasion into the northern part of the Gaza Strip, during which they leveled areas of Palestinian land which they had already razed.
Furthermore, Israeli soldiers continued the illegal use of excessive force against nonviolent protestors against the Wall and settlements in the occupied West Bank, at least two nonviolent protesters were wounded.

The army continued to attack journalists, and destroyed a camera that belong to a reporter while documenting the weekly nonviolent protest against the Wall and settlements, in Al-Ma’sara village, south of the West Bank city of Bethlehem. Two residents were wounded by army fired while dozens of protesters were treated for the effect of teargas bombs fired by the army at the nonviolent protestors.

Soldiers also kidnapped two nonviolent protesters, while an army dog attacked a protester before the soldiers kidnapped him, in Kufur Qaddoum, near the northern West Bank city of Qalqilia. A journalist was also attacked by the soldiers and his camera was destroyed.

Soldiers uprooted and destroyed more than 30 Dunams of agricultural land in the West Bank city of Nablus, and demolished a house and an animal farm in Qalqilia, also in the northern part of the West Bank.

Israel settlers, on the other hand, uprooted 220 olive trees in Nablus, and injured a Palestinian civilian from the southern West Bank city of Hebron after violently attacking him.

The PCHR reported that the illegal Israeli siege on Gaza, which has steadily tightened since June of 2007, continues to pose serious impacts on the humanitarian and economic situation in the coastal region.

“The illegal closure has caused not only a humanitarian crisis but a crisis of human rights and human dignity for the population of the Gaza Strip”, the PCHR added, “Measures declared recently to ease the blockade are vague, purely cosmetic and fail to deal with the root causes of the crisis, which can only be addressed by an immediate and complete lifting of the closure, including lifting the travel ban into and out of the Gaza Strip and the ban on exports”.

It further stated that despite the fact that the residents in the Gaza Strip may no longer suffer the main shortage of food, “they will remain economically dependent and unable to care for themselves, and socially, culturally and academically isolated from the rest of the world”.

The center reiterated the following recommendations to the International Community

1. PCHR calls upon the High Contracting Parties to the Fourth Geneva Convention to fulfill their legal and moral obligations under Article 1 of the Convention to ensure Israel’s respect for the Convention in the Occupied Palestinian Territory. PCHR believes that the conspiracy of silence practiced by the international community has encouraged Israel to act as if it is above the law and encourages Israel continue to violate international human rights and humanitarian law.

2. PCHR calls upon the High Contracting Parties to the Fourth Geneva Convention to convene a conference to take effective steps to ensure Israel’s respect of the Convention in the OPT and to provide immediate protection for Palestinian civilians.

3. PCHR calls upon the High Contracting Parties to the Fourth Geneva Convention to comply with their legal obligations detailed in Article 146 of the Convention to search for and prosecute those responsible for grave breaches, namely war crimes.

4. PCHR calls for the immediate implementation of the Advisory Opinion issued by the International Court of Justice, which considers the construction of the Annexation Wall inside the West Bank illegal.

5. PCHR recommends that international civil society organizations, including human rights organizations, bar associations and NGOs, participate in the process of exposing those accused of grave breaches of international law and urge their governments to bring the perpetrators to justice.

6. PCHR calls upon the European Union to activate Article 2 of the Euro-Israel Association Agreement, which provides that Israel must respect human rights as a precondition for economic cooperation between the EU states and Israel. PCHR further calls upon the EU states to prohibit import of goods produced in illegal Israeli settlements in the OPT.

7. PCHR calls on the international community to recognize the Gaza disengagement plan, which was implemented in September 2005, for what it is – not an end to occupation but a compounding of the occupation and the humanitarian crisis in the Gaza Strip.

8. In recognition of ICRC as the guardian of the Fourth Geneva Convention, PCHR calls upon the ICRC to increase its staff and activities in the OPT, including the facilitation of family visitations to Palestinian prisoners in Israeli jails.

9. PCHR appreciates the efforts of international civil society, including human rights organizations, bar associations, unions and NGOs, and urges them to continue their role in pressuring their governments to secure Israel’s respect for human rights in the OPT and to demand Israel end its attacks on Palestinian civilians.

10. PCHR calls upon the international community to pressure Israel to lift the severe restrictions imposed by the Israeli government and its occupation forces on access for international organizations to the OPT.