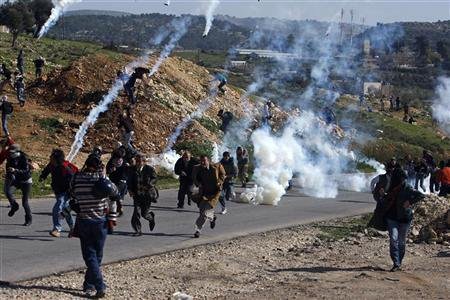 Dozens of local residents, and International peace activists, held the weekly non-violent protest against the Annexation Wall and Settlements in al-Ma’sara village, near Bethlehem. Israeli soldiers attacked the protestors leading to clashes leading to clashes between local youths and the army, no injuries were reported.The protest was conducted in support of hunger-striking detainee Hana’ ash-Shalabi, and to highlight the suffering of Palestinian women under Israeli occupation.

The non-violent protesters carried Palestinian flags and chanted slogans expressing solidarity with Hana’ ash-Shalabi, demanding that Israel release her, and to release all Palestinian political prisoners.

Ash-Shalabi has been on hunger-strike since the Israeli army kidnapped her from her house on February 16, and placed her under administrative detention without charges.

In Hebron, in the southern part of the West Bank, the Hebron Defence Committee and the Popular Campaign Against the Wall and Settlements, held a nonviolent protest in Tal Romedia neighborhood after conducting Friday noon prayers near the local mosque.

The protesters expressed solidarity with Ash-Shalabi and all Palestinian detainees held by Israel.

Media spokesperson of the Hebron Defense Committee, Anan Da’na, stated that this protest comes in support of the detainees, and to express solidarity with Shalabi who has been on hunger-strike for 37 days, demanding her release and an end to the illegal administrative detention policies.

Also on Friday, Israeli soldiers attacked Palestinian, Israeli and International peace activists conducting the weekly protests against the illegal Annexation Wall and settlements, in Bil’in and Ni’lin villages, near the central West Bank city of Ramallah; several injuries were reported.