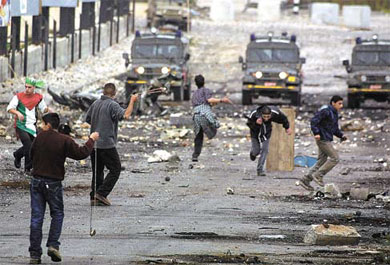 Palestinian medical sources reported Tuesday that a Palestinian youth was shot in his leg by a fundamentalist Israeli settler in the Old City of Hebron, in the southern part of the West Bank.The sources added that Mohammad Hisham Abu Iker, 18 years old, was admitted to surgery after being shot by a live round in his right foot.

His condition was described as moderate due to significant blood loss resulting from the injury. He was attacked by a group of armed fundamentalist settlers.

This assault is amongst a series highlighting a serious escalation in the severity of attacks carried out by the extremist settlers against the Palestinians, their land and property in the occupied West Bank, including in occupied East Jerusalem.

Earlier on Tuesday, three brothers were wounded during an Israeli military invasion into Rammoun village, near the central West bank city of Ramallah. One soldier was wounded during the invasion after being stabbed in his back, Israeli sources reported.

The army claimed that the soldiers opened fire at the three brothers after the soldier was stabbed. The three men were identified as Rashad, Akram and Anwar Theeb, one of whom is in a serious condition.

In related news, soldiers abducted three Palestinians in the Hebron district, and two in Husan near Bethlehem.