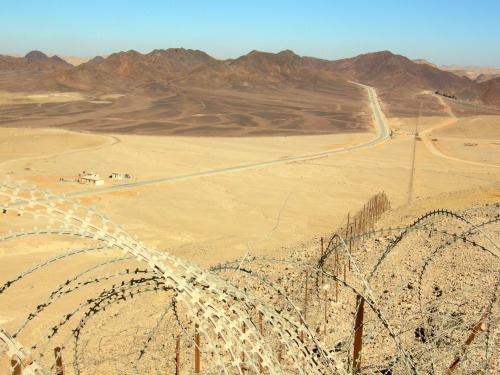 Shortly after Israeli Prime Minister Binyamin Netanyahu toured the route of a border fence under construction between Israel and Egypt, on Tuesday, Israeli Border Patrol Agents shot and killed two men whilst attempting to cross illegally.A third man escaped across the border into Egypt, with Israeli troops firing at his back as he ran. The identities of the two men who were killed in the incident are as yet unknown, but Israeli officials claim that one is a Palestinian with Israeli citizenship, and the other is Egyptian.

Apparently the men who were killed were on the Egyptian side of the border when they were shot, as the Egyptian authorities took possession of the two bodies.

This is the second such incident this month, after Israeli border officers shot at four men on the border two weeks ago, killing one and injuring three.

The killing comes in advance of massive border marches being planned for Palestinian Land Day on March 30th, when Palestinians on both sides of the border plan to march to the border fence and call for a return to their land inside what is now Israel.

Last year’s Land Day marches ended in deadly attacks by military forces in Lebanon and Syria, and were considered part of the ‘Arab Spring’ uprisings of 2011.