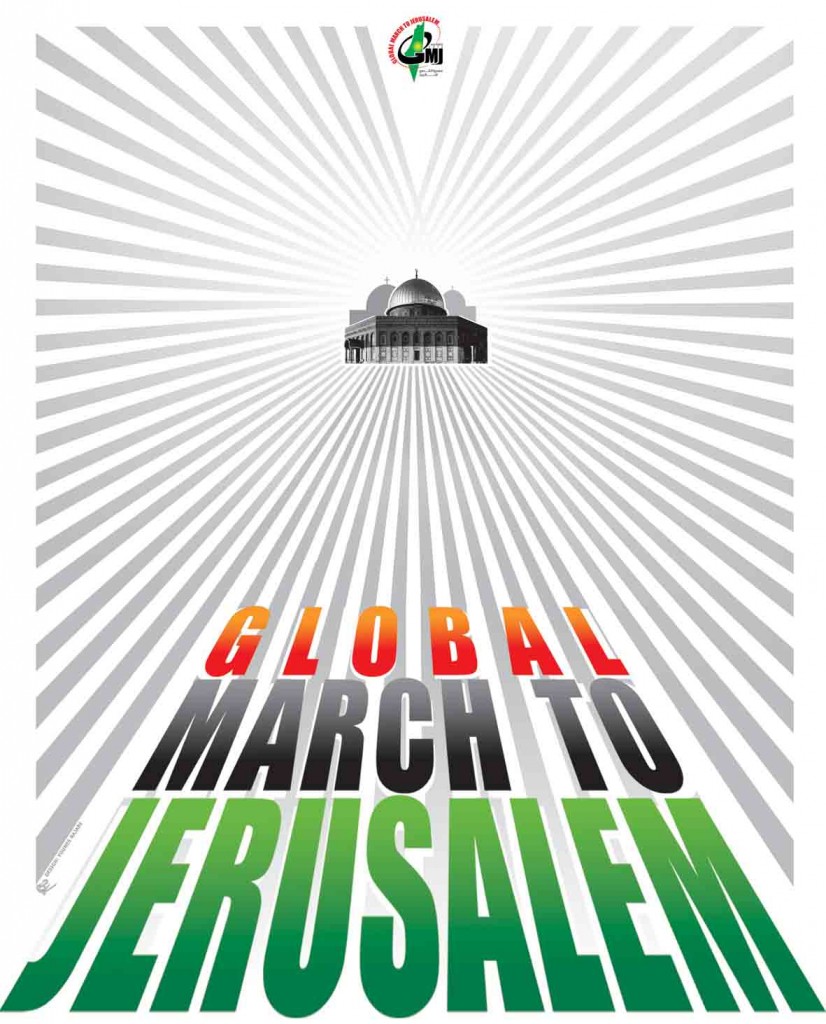 Hundreds of international non-violent activists began arriving in Lebanon and other neighboring Arab countries on Wednesday in advance of a planned ‘Global March to Jerusalem’ on Palestinian Land Day, March 30th. Land Day commemorates the seizure of Palestinian land to create the state of Israel, and calls for a return of Palestinian refugees to the land that was taken from them by force.
Marches are scheduled to take place throughout the West Bank and Gaza, as well as in Lebanon, Syria, Jordan and Egypt, with a focus on the borders with the Israeli state. Although Israel has never officially declared its borders since its creation in 1948, the marches will focus on the de facto borders created by Israel’s Annexation Wall in the West Bank and electrified border fences along the Gazan, Egyptian, Lebanese and Syrian borders.

A large number of activists arrived at the airport in Beirut, Lebanon on Wednesday, and plan to travel to southern Lebanon to participate in a march to the border that has been coordinated and approved by the Lebanese security forces.

The Jordanian government also approved a planned ‘Million Man March’ to the Jordan River, which separates the nation of Jordan from the Occupied West Bank. According to a government spokesperson, the Jordanian military will deploy a large security force along the border to prevent any infiltration of the border by protesters.

In addition, Muslim groups in Europe and the Middle East have called for mobilizations in Jerusalem focusing on the protection of Al Aqsa mosque and other threatened holy sites. According to the Global March to Jerusalem organizers, “The march will demand freedom for Jerusalem and its people and to put an end to the Apartheid, ethnic cleansing and Judaisation policies affecting the people, land and sanctity of Jerusalem.”

In addition, the organizers state, “The march will unite the efforts of Palestinians, Arabs, Muslims, Christians, Jews, and all citizens of conscience in the world to put an end to Israel’s disregard for international law through the continuing occupation of Jerusalem and the rest of Palestinian land.”

Israeli officials have stepped up security along all borders in advance of the marches on Friday. Members of the Israeli Cabinet met with Lebanese government officials earlier this week to demand that the government crack down on any attempts by protesters to cross the border into Israel.

Border protests last year on Palestinian Land Day led to some non-violent activists actually managing to cross the border into Israel. Others were shot and killed by Lebanese and Syrian security forces during the non-violent marches along the Israeli border.