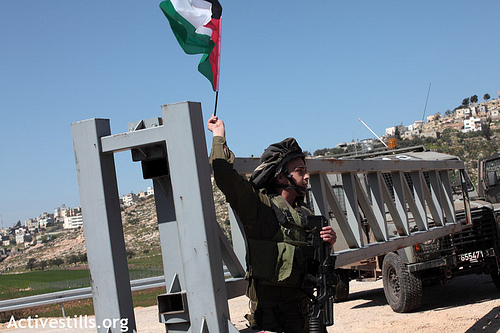 After the Israeli military re-opened the road to Beit Dajan, near Nablus, on Tuesday, a group of several dozen Israeli settlers gathered Wednesday at the entrance to the Palestinian village, many armed with automatic weapons, to block the Palestinian villagers from using the newly-reopened road.The road had been closed by the Israeli military for the past 12 years, which compelled the villagers to take a difficult, circuitous route in order to reach the city of Nablus.

According to local sources, the fence which was put in place by the Israeli military to maintain the closure remains in place, and has not been dismantled. So when the settlers arrived in a dozen vehicles on Wednesday morning, they simply had to close the gate on the fence to lock the villagers in once again.

After a call from the Palestinian Authority’s Minister of Settlement Relations to the Israeli military, some soldiers arrived and told the settlers to re-open the gate. No clashes were reported between the soldiers and the settlers.