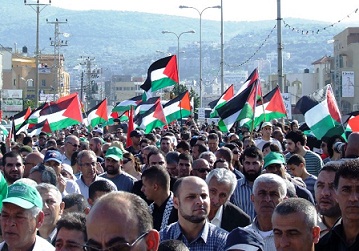 Nimir Hammad, adviser to Palestinian President, Mahmoud Abbas, stated that all marches planned for commemorating the 36th anniversary of the Palestinian Land Day, on Friday March 30th, are nonviolent in nature and will keep away from direct contact from the Israeli military, as much as possible, in order to avoid any clashes with the army.Hammad told the Palestinian Maan News Agency said that these protests are legitimate, and intend to keep away from direct contact with the military in order to avoid what happened during the Nakba marches on May 15th of last year during which several protestors were killed and injured by Israeli military fire.

He further stated that all parties and groups organizing these protests have been contacted, and are in direct communication so that they do not to give Israel the chance to use these protests in order to ignite violence in the region.

“These marches must be conducted far away from any direct contact with the military in order to avoid clashes and casualties”, Hammad stated, “These actions are nonviolent in nature and carry legitimate goals guaranteed by International Law, but we must remain alert of Israeli attempts to exploit these protests”.

Along with international supporters, the Palestinians in Palestine and in exile are planning to hold their march on the anniversary of Land Day originating in 1976 when the Israeli occupation decided to illegally confiscate thousands of Dunams of privately-owned Palestinian lands in historic Palestine, especially in the Galilee.

The Palestinians have been marking Land Day since then, and dozens of residents were killed and wounded by Israeli army fire since then. This year, the protests are planned on a different and a larger scale by calling for the Global Mach to Jerusalem, or of course, to the nearest point the protesters can reach.

The March to Jerusalem symbolizes the Palestinian right in their country, including in occupied Jerusalem, and to challenge the illegal Israeli occupation in Palestine.

The Israeli army concluded all preparations to counter Land Day and the March to Jerusalem nonviolent protests that will be kicked-off in Palestine and several surrounding Arab countries this Friday, March 30th.

The army will be provided with riot gear, including gas bombs and stink bombs in an attempt to keep the protesters away from contact areas, but, soldiers deployed in the West Bank will also be carrying sniper-rifles, the Arabs48 reported.

The main point of concern to Israel at the current moment is the border with Lebanon, while the Israeli government sent a message to Lebanon asking the Lebanese military to prevent the protesters from reaching the border.

Israeli leaders believe that the Lebanese army will deploy its soldiers along the border in order to prevent infiltration attempts, and that, on the Syrian front, it seems that the Syrian regime is not interested in encouraging violent protests “unlike what happened in May and June last year, when Syrian president Bashar Assad, supported the protests”, according to Israeli sources.

Every year, on March 30th, the Palestinians commemorate Land Day that originated in 1976 when the Israeli authorities illegally decided to confiscate and steal thousands of Dunams of private and public lands in areas inhabited by the Palestinians, especially in the Galilee.

The decision pushed the Arabs in the historic Palestine to declare a general strike for the first strike since Israeli armed forces occupied historic Palestine in 1948, and declared the establishment of Israel.
The Israeli response was to push brigades and tanks into Palestinian villages and towns leading to dozens of deaths and injuries among the civilian Arab population.

The Israeli decision was seen as the beginning of the implementation of the Zionist movement’s aims, and an implementation to the statements former Israeli Prime Minister, David Ben Gurion, who said that “settlement activities is what determine if we should defend the Galilee”.

In 1948, Israeli illegally grabbed large areas of Arab lands in the Galilee under the so-called Absentee Property Law, but the land-theft did not only include the illegal takeover of lands of exiled Palestinians, but also included lands that were previously controlled by the British army during its occupation of Palestine, and lands the belong to Palestinians who remained in the country despite the attempt to force them into exile.

The Palestinians owned, until the year 1948, 13 Million Dunams out of 27 million, Israeli forces controlled 5.1 Million, while the rest of the lands were public.

But following Israel’s establishment in historic Palestine in 1948, the newly formed state starting issuing laws and regulations under different names and categories in order to expropriate Arab areas and lands, and started considering “absentee property lands as state lands”, thus managing to illegally grab more than one million Dunams of greenest and most fertile Palestinian lands.

On March, 06, 1976, and amidst Israel’s plan to illegally grab these large areas, “the Regional Committee for Defending the Arab Lands decided to declare a general strike on March 30, 1976, in protest to these illegal plans that target the very existence of the Arab population in the area”.