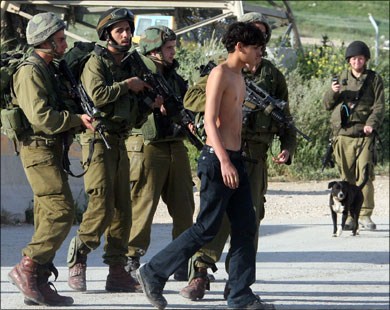 Israeli soldiers invaded, on Thursday at dawn, several Palestinian areas in the occupied West Bank, broke into and searched dozens of homes, and kidnapped nine Palestinians.The army violently broke into the homes, terrifying the residents and causing damage to their property before kidnapping the nine residents. All of the kidnapped Palestinians were moved to a number of Israeli interrogation centers.

The recent attack is part of ongoing Israeli military invasions against the Palestinians in the occupied West Bank, including in occupied East Jerusalem.

On Wednesday at dawn, soldiers kidnapped two residents from Surif town, near the southern West bank city of Hebron, broke into and searched several homes and interrogated several residents.

The army also invaded Beit Ummar town, near Hebron, and handed a former political prisoner a military order to head to the Etzion military and security base for interrogation.

She was searched by the army prior to entering the detention facility where his son is being held, and the army claimed she tried to smuggle Palestinian mobile SIM cards.

Her sister denied the Israeli claims, and stated that what happened is another Israeli attempt to prevent the family from visiting Nour.