Seven injured in clashes with Israeli troops in Bethlehem 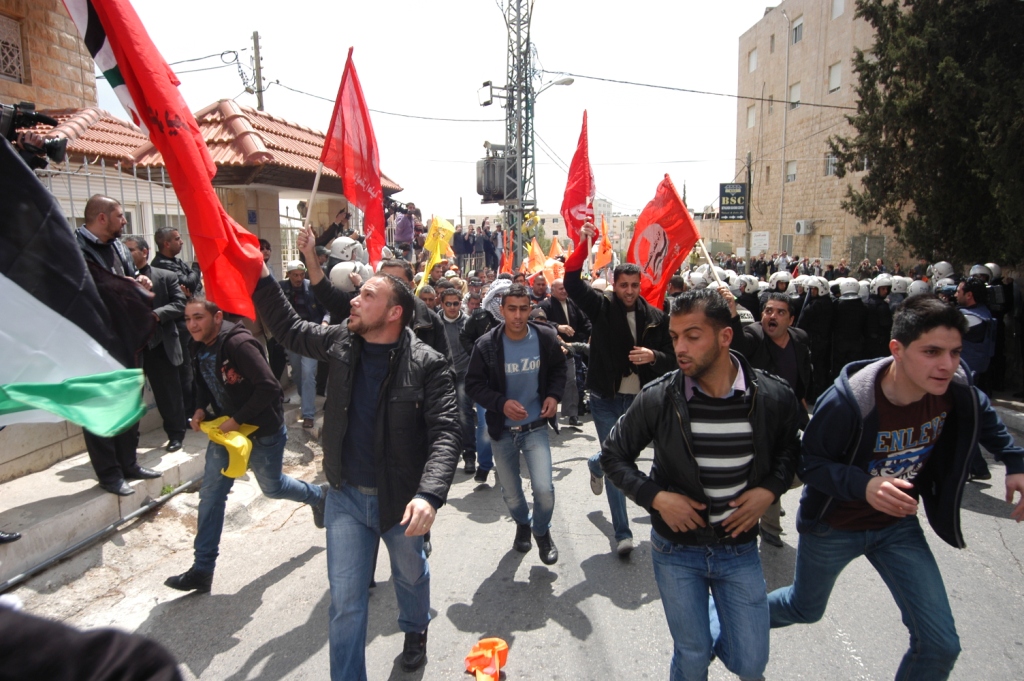 Seven protestors have been injured when clashes erupted between stone throwing youth and Israeli soldiers stationed at the military checkpoint on the northern entrance of Bethlehem.Hundreds of Palestinian civilians marched towards Jerusalem marking the 36th anniversary of land day. The marchers were first stopped by the Palestinian security forces however they managed to reach the gate of the wall separating Bethlehem from Jerusalem.

As protestors reach the gate, youth threw rocks and firebombs at the wall and the nearby military tower.

Israeli troops responded by firing tear gas and sound bombs which resulted in wounding three palestinians as they were hit with shrapnels of the sound bombs.  Their wounds were described as moderate.  Dozens others were treated for the effect of tear gas inhalation.

A source from the Palestinian Red Cresent Society told IMEMC that one resident was hit with a tear gas canister in his back causing burns and bruises. The wounded was identified as Yousef Sharqawi from Bethlehem.

Another resident was hit with a tear gas canister in his head and was transferred to the hospital for medical treatment. Field medics said his wound is critical.

The youth was identified as Ali Arafa, 20 from Deheishe, United Nations administrated refugee camp and was injured by a direct hit of a gas canister fired at him after he climbed the wall and put a Palestinian flag on it.

Don Bryant, an American Activist was also injured by a direct hit to the head
Protests in other parts of the west bank were also suppressed by Israeli troops causing injury to dozens of protestors.