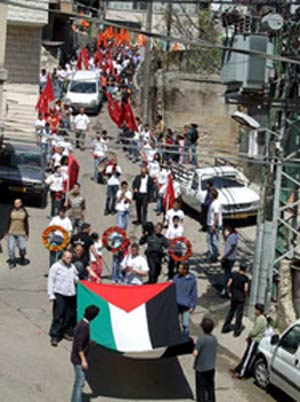 As the Palestinians mark the Palestinian Land Day on March 30th, Israel ordered the West Bank completely closed, and deployed thousands of soldiers in the occupied territories, and raised the alert level in the occupied territories anticipating massive protests along the border and at military roadblocks. Israel deployed its military in an attempt to counter the Global March to Jerusalem, mainly at the Qalandia terminal, north of Jerusalem, and Rachel Terminal, south of the city.

Israeli daily, Haaretz, reported that the Northern Command of the Israeli Army stated that Israel does not expect protest along the border with Syria due to the current Situation in Damascus, but added that protests are expected on the border with Lebanon.

Protests are also expected in Gaza, especially at the Erez Terminal and Karni Crossing.

Haaretz said that the army was briefed on “the rules of engagement”, and that the soldiers were instructed to protect the border by preventing the protesters from breaching it, yet “were also instructed to act with restraint”.

The Palestinians in the 1948 territory will be marking Land Day starting in Sakhnin town, in the Galilee, where six Palestinians were killed by the Israeli forces on March 30, 1976. After that, marches will be held in several other Arab towns.

The Higher Follow-up Committee, the representatives of several Arab parties and political groups in Israel, said that “as Israel continues the theft of Arab lands, this year will be different, and the government must cancel its plan to remove the Bedouins from their villages in the Negev”.

The protesters are also demanding Israel to allow the expansion of the boundaries of Arab towns, and to approve plans for housing projects in the Arab areas as they suffer from housing shortages as Israel develops Jewish areas while abandoning the expansion and development of many Arab towns.

Besides Sakhnin, protests will be held in Deir Hanna, Arraba, Taybeh, and Wadi An-Ni’am in the Negev, while a central protest will be held Saturday in Jaffa.
Thousands are planning to hold protests near the border area in Jordan, while organizers of the Jordanian side of Jerusalem March said that there will be no attempts to break into the border with Israel.

Several Palestinian and Lebanese factions in Lebanon, along with international supporters will be holding massive protests in Qal’et Shqeif, in southern Lebanon.
The Lebanese military will be installing roadblocks and deploying army jeeps in the areas between Saida (Sidon) until An-Nabatiyya, “to prevent any infiltration attempts into Israel”.

On March 30, 1976, Israel confiscated thousands of Dunams of Arab lands in historic Palestine; the Palestinians responded with massive popular protests, and the first comprehensive general strike. Israel responded with massive invasions and excessive violence leading to deaths and injuries among the unarmed protesters.

Israel decided to confiscate the lands earlier in 1975 when the government declared a plan dubbed as “Galilee Development” that actually aimed at establishing eight industrial areas in the Galilee on the expense of the Arab population by confiscating 20.000 Dunams of Arab lands, to fill them with settlements, and settlement-related projects.