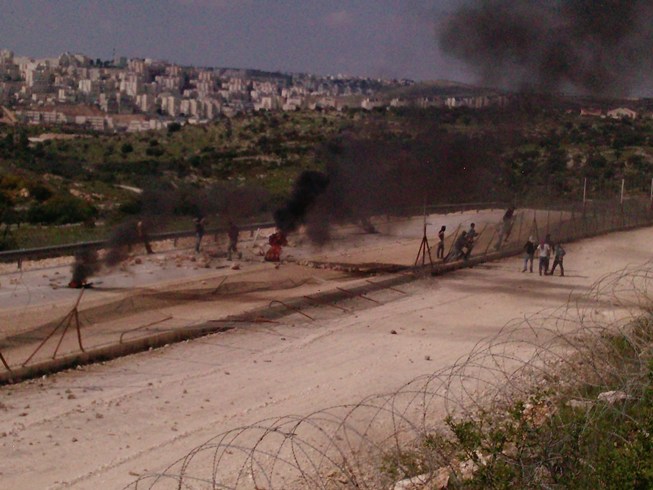 As part of the protests marking the 36th anniversary of the Palestinian Land Day, and the Global March to Jerusalem, residents of Safa village, near the central West Bank city of Ramallah, headed to their lands and orchards that were illegally confiscated by Israel, and isolated behind a barbed-wire fence, and managed to remove 100 meters of the fence. Israeli soldiers arrived at the scene and chased the protesters, an issue that led to clashes as dozens of youths burnt tires, and hurled stones and empty bottles at the armored Israeli military jeeps.

The residents continued their protest in the village, chanting slogans against the illegal Israeli occupation and Israel’s illegal colonies in Palestine.

Soldiers invaded the village and chased the protestors; no arrests were reported. The army called for special units to fix the destroyed segments of the fence.

Israel usually fences the Palestinian lands to illegally confiscate them for the construction of the concrete Annexation Wall, and for its illegal settlement construction and expansion activities in occupied Palestine.