Zoabi: “We Did Not Invade Anybody’s Land” 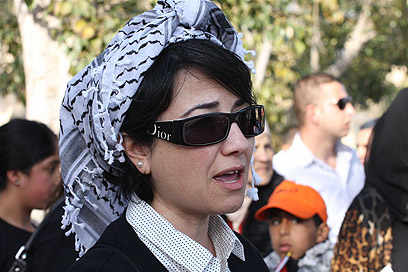 Arab Member of Knesset, member of the National Democratic Assembly, Hanin Zoabi, stated during a massive protest, marking Palestinian Land Day in Jaffa, that the Arabs and the Palestinians in the country are not the invaders, and that they want to live in peace and prosperity in the homeland.Hundreds of residents participated in the protest carrying Palestinian flags and posters that read “We Are Here To Stay”, “Stop Political Prosecution”, and “Stop The Expulsion Policies’, the Arabs48 news website reported.

Arab Members of Knesset (MK) Mohammad Baraka and Jamal Zahalka also participated in the protest along with head of the Arab Follow-up Committee, Mohammad Zeidan, and the Secretary-General of the National Democratic Assembly, Awad Abdul-Fattah, head of the Abnaa’ El-Balad (The Sons of the Land) movement, Raja Eghbariyya, and head of the Islamic Movement, Abdul-Hakim Mofeed.

Israeli Ynet News quoted Zoabi stated that “Israel is resuming what it did not finish in the Nabka of 1948, by continuing the systematic expulsion and transfer of the Arab population”.

“Israel is still conducting its illegal 63-year-old policy”, Zoabi said, “We see that as a declaration of war against us”.

“We did not invade anybody’s land, or country, we did not steal the land of any Jewish person”, she stated, “We did not raid homes, I am not a settler, am indigenous, I want to live in my home, in my homeland”.

Zoabi was one of the participants of the Freedom Flotilla that was heading to the Gaza Strip to deliver medical and humanitarian supplies and was attacked, on May 31, 2010, by the Israeli Navy while in International Waters. Nine Turkish peace activists, including one who also hold American citizenship, were killed and dozens were wounded.

Sheikh Raed Salah, head of the northern Branch of the Islamic Movement was among the participants, and was injured in the attack.

Zoabi was attacked in 2010 by Member of Knesset, Anastasia Michaeli, of the fundamentalist “Israel Our Home” Party, while at the Knesset podium. Michaeli tried to remove Zoabi from the podium by force, accusing her of “supporting terrorism” and “betraying the state”.

Several extremist MK’s verbally attacked Zoabi also accusing her of “supporting terrorism”, but Zoabi remained calm and said that “she will not be as low as they are”.