After 83 Days on Hunger Strike, Detainee in Serious Condition 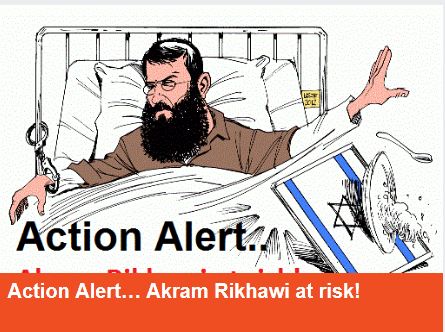 Diabetic Palestinian prisoner Akram Rikhawi has been on a hunger strike for 83 days and is at imminent risk of dying. According to the World Medical Association, in most cases death occurs between 42nd and 72nd days of hunger strike.Rikhawi suffers from various chronic conditions: diabetes, asthma, osteoporosis, kidney problems, deterioration of his eye lenses, high cholesterol, and immune deficiency.

Due to these pre-existing conditions Rikhawi’s hunger strike has been even harder on his body. He was already in fragile condition a month ago. Now he is in a coma and his condition is deteriorating fast.

Akram Rikhawi went on hunger strike on April 12 when he was not granted early
release on the basis of his medical condition and social circumstances. (He has 8 biological children and 5 adoptive children.)

He has requested for early release twice: in 2010, and on 5 June 2012. Every prisoner is entitled to ask to be considered for early release when at least two thirds of their sentence has been served. In all discussions, these factors were disregarded and a file with ‘secret information’ was the only material considered.

Rikhawi, a Palestinian from Gaza, was arrested by Israeli occupation forces in 2004 and sentenced to 9 years’ imprisonment by a military court.

During his hunger strike Rikhawi has only seen an independent doctor once, on June 6, 2012. Physicians for Human Rights-Israel (PHR-I) has made numerous requests to gain access to Rikhawi, but Israeli authorities continually deny their requests.

The situation for independent doctors to visit patients has gotten worse since the hunger strikes began earlier this spring. Now they have to apply for permission through the courts for every single visit and the courts often deny, delay and obstruct their work. This prevents the prisoners from receiving proper medical care in line with their basic, and internationally recognized, human rights.

Following the visit on June 6, the PHR-I doctor reported that Rikhawi’s weight had decreased from 68 kilos to 50 kilos, a total loss of 26.5 percent. The doctor further determined that a combination of inflammation of prior chronic illnesses and the complications of hunger strike rendered hospitalisation immediately necessary, as he was at immediate risk of death.

The Israeli Prison Service (IPS) medical centre is not a hospital, and according to the PHR-I it is not properly equipped to handle the physical deterioration and effects of long-term hunger strike.

Rikhawi has been held in the IPS medical unit in Ramleh ever since his initial arrest. On 14 June 2012 the Israeli District Court rejected a PHR-I appeal to transfer him to a civilian hospital despite his critical condition.

The decision was based on a medical opinion of the IPS that denies that his life is in danger. According to the PHR-I, ‘this opinion is in complete contradiction to the one of the independent doctor, and is not referring to any medical data on which it is based. It also does not relate to the opinion of the independent doctor and the risks it cites.’

Last week Rikhawi was briefly hospitalised to a civilian hospital several times, but returned to Ramleh prison clinic. This moving back and forth a patient in such a critical condition could also amount to a medical neglect. Akram has also been shackled to his hospital bed with three limbs, even though he is in a very critical condition.

Furthermore, since 16 June, he has been refusing any vitamins and fluids through an IV. (The IPS doctors’ threats to force-feed and force-treat him, in addition to their determination not to recommend his medical condition as worthy of earlier release from prison, has led Rikhawi to regard them with deep distrust.)

Though he is sustaining himself on water alone, Ms. Neddaf was troubled to observe that even drinking water was very difficult for him and he was only able to consume approximately one litre per day.