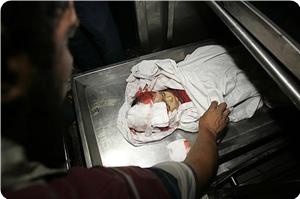 Ma’an News Agency initially reported that no Palestinian civilians were injured in the attack, though it had nothing to report on whether or not alleged militants had been killed or injured. Other reports from the Palestine News Network reveal that an unconfirmed number of civilians were harmed in the early morning air raid.

Israeli military sources have claimed that the airstrikes were a success but it has not released the names of its targets. As is often the case the Israeli military claims that all victims of its attacks are militants – either by including women, children and other non-participants as so-called ‘militants’ or ignoring them entirely.

Regardless of who was targeted, and for what reason, the grim reality on the ground is that dozens of Palestinians have been killed or injured by Israeli attacks in the past three weeks. Many of these casualties are undoubtedly women, children, and other civilians. The youngest, two-year old Hadeel Haddad, was killed during the evening of June 19.

Other children and teenagers have also been confirmed killed during weeks of intermittent bombings.

The Israeli military claims that it is carrying out attacks on Qassam rocket brigades who have fired homemade rockets into Israel during the same period. Both sides claim that the other struck first, but Hamas authorities in Gaza did put a ceasefire on the table before it was summarily rejected by Israel.

Israeli forces have criticized Palestinian militants in the past for hiding amongst civilians and using them as ‘human shields’. The military charged that such actions amount to war crimes on the part of the Qassam brigades. The known presence of these civilians has never stopped Israel from launching attacks on population centers leaving the Palestinians as ‘collateral damage’.