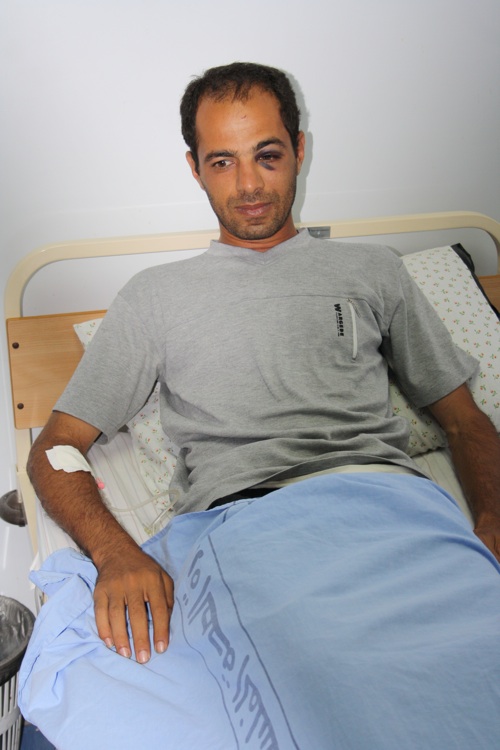 The Palestinian Center for Development and Media Freedoms (MADA) condemned the beating of journalist Mohammed Jaradat, who was covering a march in the city of Ramallah on Saturday.Mr. Jaradat reported that he went at 6pm on Saturday to cover the march, which was a protest against the planned visit by Israeli Deputy Prime Minister Shaul Mofaz to meet with Palestinian Authority President Mahmoud Abbas.

During the march, Mr. Jaradat reported that four people in civilian clothing, who he believes were undercover Palestinian police officers, beat him within sight of police.

He said they confiscated his camera and took him to the police station, where one of them said to another: ‘He is a journalist. Take care of him.”

Jaradat added, ‘After that they brutally attacked me, despite me showing my press identification. They took me to the upper floor and continued to beat me with a stick, causing bleeding in my nose. Then they arrested me, with six other people. While they beat me, I asked to see the Director of Police who is a relative of mine and he came after an hour of detention and beatings. He apologized to me and I was released.’

Lawyer Raed Abdel-Hamid said that the effects of the beatings were evident on Mr Jaradat’s face and body, including bruising around the left eye and wounds on the nose, back, chest, knees, and legs.

MADA demands the Palestinian Authority form a committee of inquiry to investigate the attack and to hold accountable all those involved. The group issued a statement saying, “This attack against a journalist who was simply doing his job is an abuse of human rights and is a serious backward step in freedom of opinion and expression.”

The MADA center noted an increase in violations of press freedom in its annual report for 2011, stating, “Palestinian security services committed 106 violations in the West Bank and Gaza Strip in 2011, marking a significant increase on 2010 which witnessed a total of 79 Palestinian violations, and a marked decrease in Israeli violations in 2011 with a total count of 100 violations compared with 2010, which saw a total of 139 Israeli occupation violations.”

However, the report also noted that “although the total number of Israeli violations decreased, the violations committed constituted a greater threat to the health and well being of the journalists, who were targeted with, for example, the excessive and inappropriate use of crowd control weaponry such as rubber coated steel bullets, tear gas, concussion grenades, and the recently introduced Long Range Acoustic Device (LRAD), coined ‘The Scream’”.