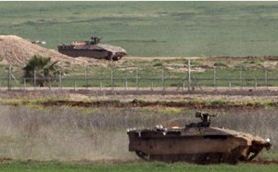 The army repeatedly invades and bulldozes lands in the area, in addition to firing tank and artillery shells, targeting residential areas and farmlands under the pretext of targeting resistance fighters, who fire shells into adjacent Israeli areas.

In related news, Tuesday at dawn soldiers invaded the villages of Nazlet Zeid, Ta’nak and Rommana, near the northern West Bank city of Jenin, and searched a number of homes.

The army installed a roadblock at the entrance of Rommana village, stopped several vehicles, and interrogated the residents.

Soldiers also invaded Tulkarem, in the northern part of the West Bank, and kidnapped two residents after invading and searching their homes.

Furthermore, soldiers invaded Beit Awwa town, near the southern West Bank city of Hebron, and kidnapped three residents, all members of the same family, after breaking into their homes and searching them.

The recent attacks are part of continuous invasions carried out by the army into Palestinian communities in the West Bank and the Gaza Strip.