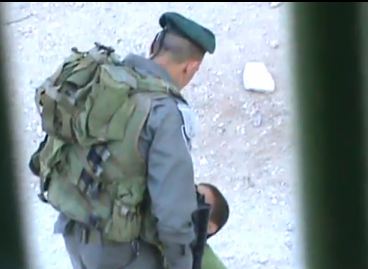 The Israeli Information Center for Human Rights in the Occupied Territories (B’Tselem) published a video taken by one of its volunteers showing an Israeli officer of the Border Police kicking a Palestinian child while another officer held the child. The attack took place in Hebron, in the southern part of the West Bank.The child, Abdul-Rahman Burqan, 9, lives with his family near an area used by the Israeli army as a parking lot near the Ibrahimi Mosque in Hebron.

The video shows an Israeli Border Police officer ambushing the child as he was walking past a corner. One officer grabbed him by the arm, and told him “why are you making trouble?”

The officer then dragged the screaming, terrified child on the ground for a few seconds before another officer kicked him. Soldiers then let the child go and left the area; the child then ran away.

B’Tselem stated that the assault was caught on tape by a volunteer in its camera distribution project, from inside his own home. B’Tselem distributes the cameras so that the residents can film Israeli soldier and settler attacks against them and their lands.

B’Tselem said that its volunteer started filming when he noticed a soldier hiding behind the wall; there were no confrontations or clashes in the area.

The organization said that it intends to refer the case to the Ministry of Justice so that the Police can investigate it.

Soldiers and settlers were filmed numerous times abusing Palestinians, including villagers and shepherds; many of these incidents included the use of live ammunition, in numerous cases soldiers were present when the settlers carried out these attacks.