Romney to Visit Israel in July 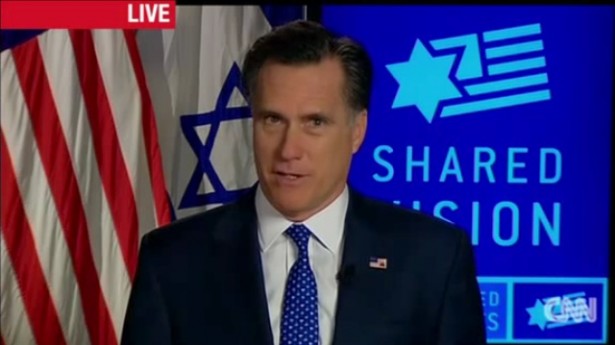 Republican presidential candidate Mitt Romney plans to visit Israel later this month and meet with Israeli Prime Minister Benjamin Netanyahu. Romney is a vocal supporter of Israel and is reported to be on better terms with Netanyahu than current President Barack ObamaVarious international sources have reported that Mitt Romney will visit Israel in late July. The visit will shore up his image with the powerful pro-Israel lobby in the United States. It will also make inroads with Prime Minister Netanyahu should Romney succeed in ousting incumbent President Barack Obama.

The foreign policy angle is secondary to the political calculus of Romney portraying himself as a confidant of Netanyahu. The PM’s hardline policies toward Arab-Israelis and toward Palestinians and the Occupied Territories have drawn the condemnation of much of the international community. Netanyahu’s support of settlements has also been officially denounced by the International Courts of Justice (ICJ)

However, polling data has shown American Jews to be among the most ardent supporters of Israel’s so-called ‘security’ policies. The New York Times reports that Romney intends to show himself as a close supporter of Israel’s right to safety and territorial integrity. By proxy, he would like to falsely portray President Obama as a pro-Arab radical who fails to put Israel first among his Middle East policy initiatives.

If Romney’s policy alchemy is successful, he may be able to siphon away wealthy and influential Jewish American donors who often tend to vote Democratic in national elections.

The truth of the matter is both candidates are firm supporters of Israel. President Obama has made no secret of his ‘rock solid’ support of Israel and has spoken annually at the American-Israeli Political Action Committee (AIPAC).

Many agencies, including a July 3 article in Haaretz, have reported on the rumored mutual discontent shared between Obama and Netanyahu – primarily stemming from Obama’s willingness to meet with members of the Palestinian Authority and to engage with the Arab world on mutual terms. President Obama has criticized the Netanyahu government’s persistence on launching strikes against Iran. He has also called on Israel to voluntarily accept rulings regarding illegal West Bank settlements. However, the president has never forced Israel to comply with international law.

Romney, on the other hand, has on several occasions expressed his desire to join Israel in airstrikes against Iran and has declared that he would have already considered an full invasion if he were president. Romney is also an ardent supporter of the illegal annexation wall in the West Bank and has never challenged the West Bank settlements.