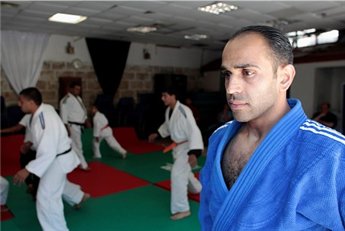 Judoka Maher Abu Rmeileh becomes the first Palestinian to qualify for the Olympic games based on his performance in a recent qualifying match in Japan.

Maher Abu Rmeileh became the first Palestinian to qualify for the Olympic games based on merit. Previous Palestinian athletes have competed due to an International Olympic Committee (IOC) program for nations whose athletes have not been able to attain the minimum to qualify.

At a recent qualifying event in Japan, Rmeileh secured his spot in the under 73-kilo division. He will carry the Palestinian flag at the opening ceremonies in London on July 27th.

The 28-year-old father of two spends most of his day working at his father’s scarf shop before heading to the Al-Quds Sports Club in East Jerusalem to train. Due to obligations to family and work, he is unable to dedicate all of his time to training like many Olympic hopefuls.

However, Reuters reports that he speaks with pride of his family’s dedication to sport. His father was his first coach at the age of seven, and his brothers and uncles are also known as athletes.

Israel has state-of-the-art judo training facilities in Jerusalem and has three Olympic medals in the sport. The IOC has tried to facilitate cooperation with the Israelis, but Rmeileh has continued to train in East Jerusalem. His coach, Hani Halabi explained the decision not to hold joint Palestinian/Israeli events, ‘I cannot ask a Palestinian boy to compete against an Israeli while his father is in jail, or his house has been demolished and he can’t go through checkpoints. Only when we have a real and just peace, no settlements, no prisoners in Israeli jails and we have free country, we will be ready to have joint activities.’