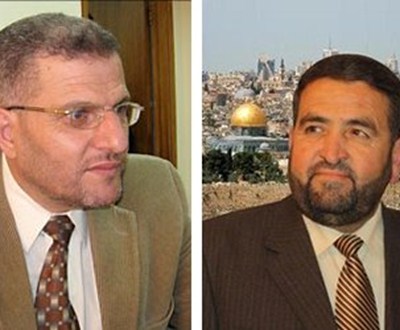 On Thursday Israel released two legislators of the Change and Reform Bloc, a wing of the Hamas movement, after imprisoning them without charge at the Negev Detention Camp for 18 months under Administrative Detention.The released legislators are Dr. Mahmoud Ar-Ramahi, from the central West Bank city of Ramallah, and Nizar Ramadan, from the southern West Bank city of Hebron. Ar-Ramahi is the secretary of the legislative council.

Israel kidnapped Dr. Ar-Ramahi on November 10, 2010, and placed him under administrative detention. This sentence was renewed three consecutive times without a formal charge.

Legislator Ramadan was kidnapped on November 4, 2010, and was also confined under repeatedly renewed administrative detention orders.

Fateh leader, legislator Marwan Barghouthi, and secretary-general of the Popular Front for the Liberation of Palestine (PFLP), Ahmad Saadat, are also imprisoned by Israel and serving life terms. There are approximately 26 legislators currently detained by Israel.

There are nearly 4,700 Palestinians imprisoned in 17 Israeli prisons, detention camps and interrogation centers; this includes six women and 185 children. Of these, approximately 320 Palestinians are held under Administrative Detention orders.

After Hamas achieved an overwhelming victory in the legislative elections in 2006, Israeli kidnapped and imprisoned more than 50 elected legislators. The Israeli army also kidnapped dozens of elected officials, including mayors and members of local councils in the West Bank.

On Thursday, Israel renewed the administrative detention order against legislator Omar Abdul-Raziq for an additional six months for the third time in a row. He was supposed to be released on July 9.

The Ahrar Center for Detainees’ Studies and Human Rights, reported that Abdul-Raziq was kidnapped on January 11, 2011, and was placed under administrative detention orders without charges.