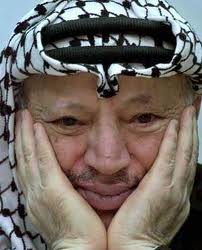 The Al-Mayadeen TV, based in Lebanon, published a video reportedly documenting the confession of a collaborator with Israel, operating in the Negev detention camp, in which he said that “Israel recruited him to poison dinner meals of late President Yasser Arafat”.The tape was recorded in 2006; in it a Palestinian detainee was interrogating the collaborator, who was assigned to spy on the detainees at the Negev detention camp before he was exposed.

The alleged collaborator detailed how he smuggled poison, and with the collaboration of some persons and a cook at the then besieged presidential headquarter in Ramallah, he managed to poison one of Arafat’s meals, and even personally handed the meal to him.

According to the report, the collaborator was recruited by Israel in 2002, and poisoned Arafat’s meal in 2004.

The man explained how a collaborator recruited him and took him to Jerusalem where he met an Israeli security officer by the name of Yoram, and the two agreed to “work together” before he took him to a Border Guard Police base in Maaleh Adumim Israeli settlement, where he was allegedly trained for two months.

Following the training, the man was taken to Jerusalem before he and some other collaborators were taken by a number of Israeli security officers back to the base, and showed the officers a video about the presidential headquarters detailing the location of the Arafat’s bedroom, and the kitchen where his meals were prepared.

On July 6, 2004, the collaborators were given a poison bottle and some cash, and were told that if they do not go ahead with the plan, they will be killed.

The collaborator also stated he asked one of the chefs to place the poison in Arafat’s dish (soup, rice and roasted chicken), but the cook got scared, and another cook took over and placed the poison in the rice and the soup.

On Tuesday, and following a report by the Qatar-based news agency Al-Jazeera about the assassination of Arafat, the Palestinian Authority announced its support Wednesday for an international investigation into the late president’s death including the exhumation of Arafat’s body.

Arafat’s widow, Suha, also requested the body of Arafat exhumed so that the needed analysis can be conducted.

The Al-Jazeera report came after a nine month investigation, and stated that the Institut de Radiophysique in Switzerland found abnormally high levels of a rare radioactive element called polonium-210 on Arafat’s personal belongings, his widow, Suha, called for the exhumation of his body.

Questions have surrounded the circumstances of Arafat’s death since his sudden illness during the second Intifada in 2004. PLO official Saeb Erekat said the Palestinian Authority is looking to form an international tribunal to investigate the case modeled after the one that looked into the death of former Lebanese Prime Minister Rafiq Al-Hariri.

But the former head of Israeli domestic intelligence, Avi Dichter, told Israel’s Army Radio that the Palestinians are responsible for the outcome. He asserted, ‘The body is in their hands. It is in Ramallah and, really, all the keys are in their hands.’