General Assembly of US Presbyterian Church Narrowly Votes Against Divestment 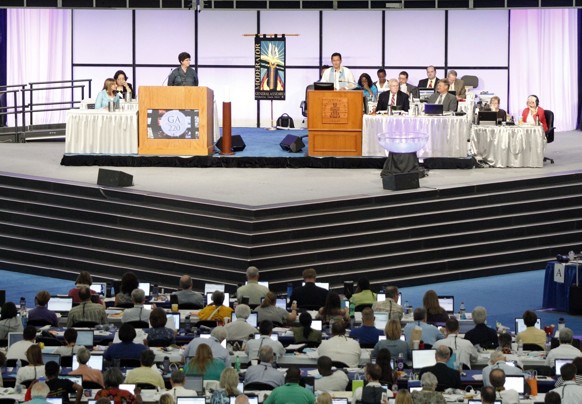 The General Assembly of the US Presbyterian Church narrowly voted against divestment in three companies doing business with the Israeli military. The extremely close vote on Thursday, 333-331 against the resolution, came after the church’s Middle East Committee had recommended divestment on Tuesday.The main reason given for voting against the resolution appeared to be the fear of alienation from Jewish groups within the US with whom the church cooperates in areas of common concern. This is despite support for the resolution from many Jewish groups within the US including Jewish Voices for Peace.

The General Assembly later voted 369-290 in support of a resolution to invest in the Occupied Palestinian Territories which was seen as a more positive alternative to divestment.

The three companies, Caterpillar, Motorola Solutions and Hewlett-Packard, were being considered for divestment after eight years of negotiations with the church to convince the companies to change their policies. According to the New York Times, a church committee report said that “Caterpillar supplies bulldozers used to demolish Palestinian homes, Motorola provides surveillance equipment to monitor Palestinian villages in the West Bank, and Hewlett-Packard supplies biometric scanners used at checkpoints and technology used by the Israeli Navy in the blockade of Gaza.”

In a report on the Israeli online newspaper Ha’aretz, while the vote did not favor divestment this year, members were committed to revive the issue next year. Many expressed strong emotions about the church’s support for the occupation with this vote. And if progress is not made that favors Palestinian human rights and dignity, the results of another vote next year may be very different.