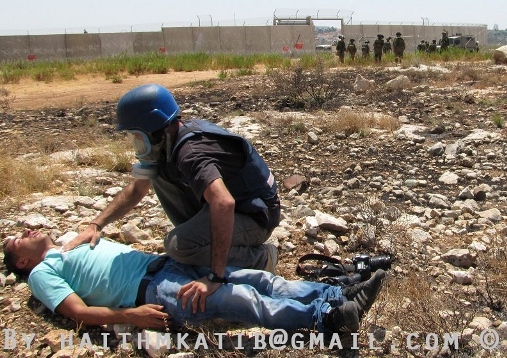 The Friends Of Freedom and Justice Committee in Bil’in reported Friday that Israeli soldiers attacked the weekly nonviolent protest against the illegal Annexation Wall and Settlements, leading to several injuries.The Committee said that resident Mu’awiya al-Khatib, 17, was shot in his foot while dozens of protesters were treated for the effects of tear gas inhalation.

The Committee stated that the soldiers fired rubber-coated metal bullets, stun grenades and gas bombs at the protesters as soon as they arrived at the Abu Lemon area that was returned to the resident following an extended legal battle in Israeli court.

The soldiers also sprayed the protesters with waste-water mixed with chemicals; gas bombs and concussion grenades fired by the army also led to fires in olive orchards.

A Brazilian delegation also participated in the protests that marked the eighth anniversary of an advisory ruling of the International Court of Justice, in which the court ruled that the Annexation Wall is illegal and called for its removal.

Israel confiscated nearly 60 percent of the lands owned by Bil’in residents; the stolen lands were used for the construction of illegal Israeli settlements and the illegal Annexation Wall.

Hundreds of residents and activists were injured during Israeli military attacks against nonviolent protests in Bil’in, the nearby Ni’lin and Nabi Saleh villages, al-Ma’sara village, south of Bethlehem, Kufr Qaddoum near the northern West Bank city of Qalqilia, and several other villages in the West Bank.

In Kufr Qaddoum, a 40-year old man, Majid Jum’ah, was abducted during the non-violent protest while several protestors were treated for the effects of tear gas inhalation after they were bombarded with canisters. A house was evacuated due to nearby fires resulting from teargas bombs fired by the army.

Several residents, including Jawaher Abu Rahma and her brother Basel Abu Rahma, were killed by Israeli fire and gas bombs during as the army uses excessive force against the nonviolent protesters.