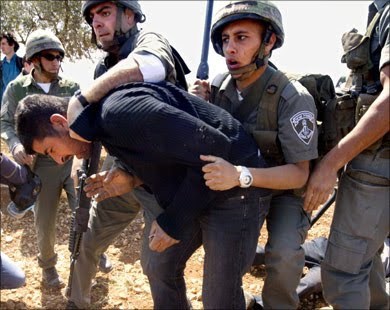 Israeli soldiers invaded, on Sunday morning, the towns of Doura and Ein Sinjer, south of the southern West Bank city of Hebron. Two Palestinian workers were wounded after being assaulted by settlers near Hebron.Media sources in Hebron reported that more than 14 armoured military vehicles and three military vans, invaded Ein Singer, located between Doura and Hebron.

The soldiers carried maps while deploying in the streets and the lands of the village.

In related news, two Palestinians were wounded at the ath-Thaheriyya roadblock, south of Hebron, after being violently attacked by Israeli soldiers at the roadblock.

The Quds Press media agency reported that Ahmad Abu Salim, from Balata refugee camp near the northern West Bank city of Nablus, suffered a broken leg and several bruises, while Ra’fat Abu Ra’eyya, from Tarqoumia town near Hebron, suffered several cuts and bruises. They were both moved to the government hospital in Hebron.

On Saturday at night, dozens of military vehicles were deployed around different towns in the Hebron district. Soldiers also installed several roadblocks on the main streets leading to al-Arroub refugee camp and Sinjer area in Hebron.

Also on Saturday, the village of Yanoun, southeast of Nablus, was attacked by extremist settlers from the illegal Israeli settlement of Itamar. Five Palestinians were injured in the attack and large sections of agricultural land were set ablaze.