Netanyahu Says He Is Willing To Meet Abbas, Release Detainees 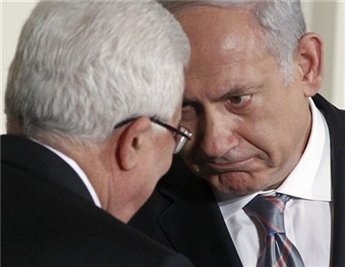 Israeli Prime Minister, Benjamin Netanyahu, stated that he is willing to release dozens of Palestinian detainees before the end of this year, in exchange for holding a meeting with Palestinian President, Mahmoud Abbas.Israeli daily, Haaretz, reported that nearly 25 of the detainees that Netanyahu is willing to release are what Israeli describes as “detainees with blood on their hands”, a term Israel uses to refer to detainees involved in attacks that led to casualties.

Haaretz added that Israel made it clear to the Palestinian Authority, headed by president Mahmoud Abbas, that it will not agree to release detainees who have been imprisoned since before the Oslo Peace agreement of 1993, unless Abbas holds a meeting with Netanyahu to ensure the resumption of peace talks.

It is worth mentioning that, last week, Yitzhak Molho, Netanyahu’s envoy and head of the Israeli negotiations team, held a meeting in Jerusalem with chief Palestinian negotiator, Dr. Saeb Erekat.

Despite the official declaration of not holding talks with Israel, several Palestinian and Israeli officials held talks in different places, including in Amman – Jordan.