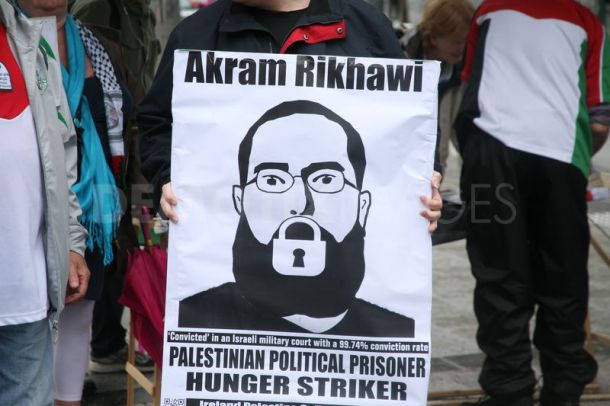 Akram al-Rikhawi, who has now been on hunger strike for 91 days is unable to move his left leg and is at risk of dying, his lawyer and doctor both reported Monday.Al-Rikhawi, who is married with eight children, was sentenced to 9 years in prison by an Israeli military tribunal after being stopped by Israeli military forces near Rafa in 2004.

Since being imprisoned he has been denied access to his medication which has led to severe health complications.

More than 1,000 Palestinian prisoners began a hunger strike in April to protest against illegal arrest procedures, poor prison conditions and administrative detention where Palestinians, including many children, can be held indefinitely without trial

The hunger strikes have received widespread international publicity and have served to highlight the treatment of Palestinians by the Israeli occupation forces. Israel’s treatment of prisoners has been broadly condemned, with one UN expert saying he was “appalled” by the ongoing human rights violations in Israeli prisons. In all, 178 decisions have been issued by the UN condemning Israel for its serious mistreatment of Palestinian prisoners since 1967.