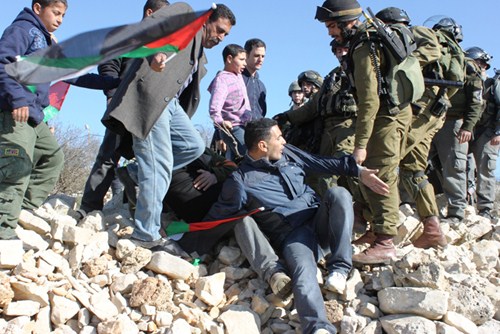 Israeli soldiers attacked, on Saturday, dozens of Palestinian and international peace activists holding their weekly protest against the Israeli annexation wall and settlements, in Beit Ummar town, in the southern West Bank city of Hebron.Yousef Abu Maria, coordinator of the Popular Committee Against the Wall and Settlements in Beit Ummar, stated that the army violently attacked and clubbed the protests leading to several injuries.

Abu Maria added that the army also closed the area and declared it a military zone in an attempt to prevent the peace activists from holding their protest and to prevent them from reaching the lands that became isolated behind the Annexation Wall, in addition to the lands Israel intends to steal for settlement construction and expansion.

Similar to other villages and towns in the West Bank, Beit Ummar holds weekly protests against the wall and settlements; Israeli and international peace activists join these protests, Israeli soldiers continuously resort to the use of excessive force to stop these protests.

In related news, soldiers kidnapped on Saturday morning a Palestinian resident north of Hebron district and took him to an unknown destination. The army installed several roadblocks in different areas in the West Bank, stopped and searched dozens of vehicles and interrogated the residents.

Soldiers also broke into and searched several homes in the city, and a number of nearby villages.

On Friday at dawn, soldiers kidnapped at least five residents from different parts of the West Bank, and moved them to interrogation facilities.