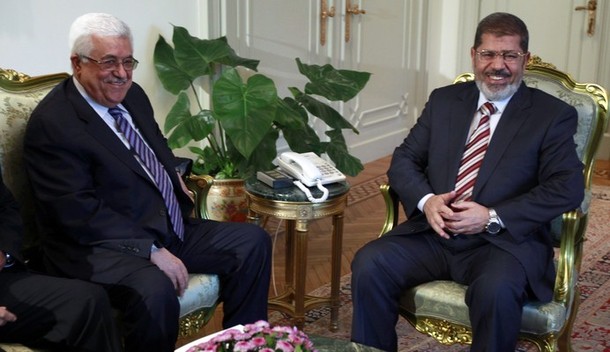 Palestinian President Mahmoud Abbas met with newly-elected Egyptian President Mohammed Mursi on Tuesday evening in Cairo to begin a two-day series of discussions regarding their nations’ future.Multiple agencies have reported on meetings between ranking Palestinian and Egyptian officials carried out in Cairo during the last two days. President Abbas arrived in Cairo on Tuesday night and met briefly with Mursi at his offices, according to The Jerusalem Post. Further meetings we held throughout the day Wednesday.

The primary point of discussion between the two leaders focused on Egypt’s role in repairing the fractured relationship between Fatah leadership in the West Bank and Hamas in Gaza. Hamas is a splinter of the same Egyptian Muslim Brotherhood that Mursi led to sweeping election victories in 2012. Mursi’s election victory this summer was praised by Hamas leadership and Mursi made relieving the embattled citizens of Gaza a priority for his government.

Hamas leadership followed Abbas to Cairo but they will not meet formally with President Mursi until Thursday night, reports AhlulBayt News Agency.

Delegations from the West Bank-centered Palestinian Authority (Fatah) and Gaza-center Hamas are not scheduled to meet. President Abbas stated earlier this month that attempts to form a unity-government between the two Palestinian factions had reached a deadlock, according to The Jerusalem Post.

Both Abbas and Mashaal will independently discuss the future of Israeli-Egyptian relations and prospects for Israeli-Palestinian peace, according to Bloomberg News.

Egypt, then under the leadership of long-time president Hosni Mubarak, joined the Israeli military in sealing Gaza off behind a border fence and wall in 2007. Many believe that President Mursi has plans to remove the separation between Egypt and the Gaza Strip, but his long-term plans for Israel are unclear. The president has stated that he would revisit the 1979 Israeli-Egyptian peace agreement demanding to be an equal partner in the process.

With so much domestic political and economic tension to unravel after years of stagnation and a popular revolution any timeframe for returning to the drawing board is likely years away.